Patrick Vincent, the Lawrence Arts Center printmaking artist-in-residence is pictured on Thursday, May 23, 2013, before a wall of insects featuring the heads of many local residents. The exhibit, titled Stigmergic, was envisioned like a science experiment where Vincent set parameters and waited to see how it would take shape with community involvement.

Stigmergic, aka the Bugs Project, is on display through June 22 at the Lawrence Arts Center, 940 New Hampshire St. Admission is free.

The exhibition features an installation of prints and print blocks by Arts Center printmaking artist in residence Patrick Vincent.

Read more about Vincent or submit a request to be included in the Bugs Project on his website, twinbeepress.com. 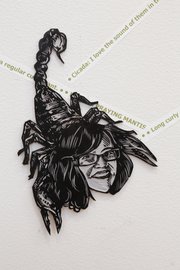 Lawrence artist Molly Murphy, with the body of a scorpion, is part of Patrick Vincent's Stigmergic exhibit at the Lawrence Arts Center. 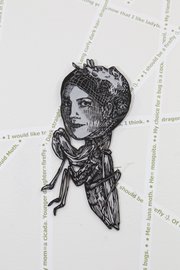 Printmaker Patrick Vincent set up Stigmergic — aka the Bugs Project — like a science experiment. Define parameters, he thought, then see how things play out.

Vincent would create prints of people’s faces on the bodies of bugs of their choice, then display his work. But how many people wanted to be turned into a bug? What kind of bugs would they choose? How would he eventually pull his work together into an exhibit?

All those variables took shape over the past year and are now on view in a creepy, crawly installation at the Lawrence Arts Center, where Vincent is winding down his year as the Arts Center’s printmaking artist in residence.

And, to answer one question, there are a lot of dragonflies.

At first this worried Vincent. Why did it seem everyone wanted to be a dragonfly, a butterfly or a ladybug? Or some kind of mantis (this reporter included)?

He got requests to make bugs out of infants, whose soft features are difficult to depict in a block print. People wanted to be things that aren’t actually bugs. One man wanted to be a tiny species of insect that flies in swarms, insisting that his print depict this trait.

Vincent had an attitude adjustment early on, reminding himself that he needed to let it go.

After all, it was his idea to make this project an experiment.

“Now all these strangers have a connection — I guess that was the goal,” he says. “Also, my goal was to be surprised a little bit.”

The result is an exhibit filled with whimsy, personality, human observations and, it turns out, quite a variety of bugs.

Vincent started getting requests for unique insects — like a cave spider, a cactus bug and some more unusual mantises, like the exotic orchid mantis and a craggy devil mantis (who, incidentally, is wearing a gas mask). There are babies, a dog, a couple who wanted their faces on a pair of beetles engaged in a mating ritual and, as ordered, a print featuring the same man’s head on three connected winged bugs.

As for non-bug requests, Vincent fulfilled them as long as they were “creepy, crawly and small” — hence the worm, the slug and the snails.

“It’s a loose parameter,” he says.

In the installation, an accordion book featuring 150 participants’ bug prints is displayed on a shelf spanning three walls of the gallery (closed, the 10-by-12-inch book is nearly 10 inches thick, Vincent says). The original rubber print blocks for each of those bugs — plus more Vincent drew after finishing the book — are on the walls.

Large prints of Vincent’s muses — the only faces who didn’t personally request to be included — anchor clusters of smaller bugs. Scientist E.O. Wilson, known for his study of sociobiology, is an ant, the insect on which he’s said to be the world’s leading authority. Louise Bourgeois, a French artist famous for her spider sculptures, is, naturally, a spider — a creature many find revolting but that Bourgeois viewed as protective and nurturing.

Surrounding Bourgeois is a web of words on strips of paper, passages from emails Vincent received from people explaining their choices of bugs.

Some people shared a memorable experience with a certain kind of bug, like the man who said he learned a lesson in humility when a katydid he thought was harmless delivered a stinging bite. Others cited beauty in certain bugs, like the person who loves cicadas for the “jewelry work in their wings.”

Yet others seemed to seek a way to resolve fears about a certain kind of bug by being combined with it, Vincent says.

That’s part of the reason he picked bugs.

Animal imagery is a recurring theme in Vincent’s work, and he views it as a way of “distilling” human emotions. Humans can be so complicated, he says, while animals seem simpler.

Most of the exhibit’s participants are from Lawrence, but about a third are from out of the area or state. Vincent figures they must have read about the project online. Everyone got a free signed print of their bug.

Vincent says he plans to keep adding bugs to the project as time allows. He hopes to eventually display the installation at other venues, and he figures the more the merrier when it comes to bugs.

“The whole wall would be just crawling with people,” he says.