Wonder Fair wants to make Lawrence a destination for prints, an art form for the people 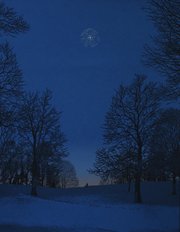 "Like a Diamond in the Sky" by Dan McCarthy, at Wonder Fair

"Summer City" by Will Bryant, at Wonder Fair 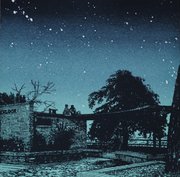 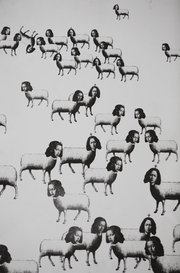 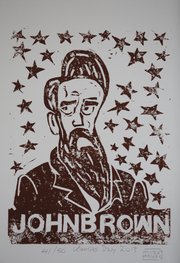 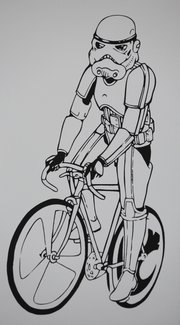 Meredith Moore is hunched over a minuscule sink in a closet-sized bathroom, water running, furiously scrubbing.

Watermelon-colored goo drips through her hands, making an electric pink waterfall in the sink basin before swirling down the drain.

On this afternoon Moore — wisely wearing an apron — is doing double-duty at Wonder Fair, the downtown art gallery she owns with her husband. She’s manning the shop and working on a printmaking project.

But both tasks fit into another, bigger goal for Wonder Fair: help establish Lawrence as the print destination of the Midwest.

“We have this, basically, critical mass of print geniuses living in Lawrence and Kansas City,” Moore says. “So frankly, it’s just logical.”

Moore and other print experts agree that Lawrence has exceptional print and printmaking assets. It’s just a matter of lassoing and promoting them, and working in groups comes naturally for print people anyway.

“We’re all a little crazy-obsessive,” Moore says. “Printmakers tend to congregate and get really excited about prints together.”

The gallery and shop at 803 1/2 Massachusetts St. may be small, but Moore has big ideas when it comes to prints.

One of the loftiest orders of business is planning Lawrence Print Week.

Inspired by New York City’s Print Week, the Lawrence Arts Center is collaborating with Wonder Fair to plan a week of events all about prints, scheduled for Sept. 15 through 21.

“It’s a great medium,” Ahlvers says. “It’s also sort of a good gateway or an introduction to people who might be interested in art or collecting art but aren’t really sure how that works ... prints are good about letting down that wall a little bit.”

Ahlvers and Moore say they hope to involve all of Lawrence’s print players.

Kansas University is ranked No. 21 on U.S. News and World Report’s list of best grad schools for printmaking. The print collection at the Spencer Museum of Art is acknowledged as one of the nation's premier repositories of graphic arts among university museums, and the public is allowed to request and view prints in person every Friday in the museum’s Print Room.

The Arts Center has had a printmaking artist in residence for seven years, and Ahlvers says the quality of applicants for it gets better and better each year.

There’s also a couple of print shops in town, and Lawrence was the birthplace of the Lawrence Lithography Workshop. Now located in Kansas City, Mo., the fine art print publisher has a 3,600-square-foot facility and collaborates with nationally known artists.

Moore says she hopes the event could grow into a tourist attraction for print-newbies and print-junkies alike.

Purists might argue the project Moore is working on this afternoon at Wonder Fair isn’t really printmaking, though she disagrees.

The pink goo is photo emulsion gel, and she’s using it to make polymer rubber stamps for kids in summer classes at KU’s Confucius Institute. Four down, 46 to go, all designs the children drew and will be able to replicate with their custom-made stamps.

The stamp-making equipment — like a tabletop letterpress machine in an adjacent back room — was purchased with money Wonder Fair raised through a Kickstarter project this spring.

The project enabled Wonder Fair to buy tools needed to become not just a gallery but a print shop, too.

“We thought these would be used to make things for the community,” she says. “So it’s working.”

Wonder Fair’s ambitious mysterious campaign, “The Secret Order of the Black Diamond,” tripled its initial fundraising goal of $3,500 and drew members from all over the world, almost certainly thanks to spending a day as the featured project on the Kickstarter.com home page, Moore says. Donors — who became members of the secret order — received black diamond lapel pins to covertly identify themselves, letterpress calling cards and clues directing them to secret caches of prints (some printed with glow-in-the-dark ink).

In addition to a new art show every month, Wonder Fair hosts seasonal special events that aim to be interactive (Black Diamond donors got to letterpress their own membership cards, for example). At any given time, there are up to a dozen interns from KU and the community helping.

‘Tumblr of the time’

In many ways, Wonder Fair itself is a lot like art prints — low-cost and accessible but often a vessel for big ideas.

Moore, who has a master’s degree in art history and has done doctorate-level work in printmaking at KU, bubbles with knowledge about this everyman art form.

Prints are made in multiples, they’re small and portable, and they’re affordable. Historically, Moore says, churches sold tiny prints for people who’d made pilgrimages to take home. In many countries, artists created and distributed prints criticizing political leaders. Inexpensive broadsheets were sold on the streets.

“They were the Tumblr of the time,” Moore says.

Wonder Fair opened in 2008, and Moore and her husband, Paul DeGeorge, took over in 2011. They sell prints by local and national artists, along with other art and handmade items.

The perfect word to describe the work for sale at Wonder Fair is hard to come by. Moore says “weird” is OK, though she leans toward “whimsical.”

Wonder Fair aims to fill a niche. There are other galleries in town selling high-end, often expensive prints by established artists, Moore says. Wonder Fair has lots of new, young artists that appeal to a youthful subculture.

“Less landscapes, more strawberry pillows,” Moore says of her stock, gesturing at a row of throw pillows that are, in fact, shaped like strawberries (with faces).

There are framed prints and letterpress cards, jars of jelly with tiny printed picture books attached, sock puppet portraits and lots of zines — self-published comic books. Many items’ price tags are in the single digits.

Ahlvers says the gallery and shop’s lightheartedness and sense of humor works.

“They’ve got a pretty good eye for calling out young, talented artists and showing their work in a nice way,” he says. “It’s hip, it’s happening, it’s now.”

Kate Meyer, assistant curator of works on paper at the Spencer Museum of Art, sees Moore as leading a charge to cultivate seeds that are already in town.

Adds Stephen Goddard, the Spencer’s associate director and senior curator of works on paper, “If New York City can do a print week, why can’t we?”