A return to Oz

‘Great and Powerful’ a high-tech take on classic, unique universe

Oz, played by James Franco, and Finley the flying monkey, voiced by Zach Braff, are pictured in a scene from “Oz the Great and Powerful,” to be released Friday. “Oz” is the latest in a long line of adaptations and spinoffs of L. Frank Baum’s classic “Wizard of Oz” stories. 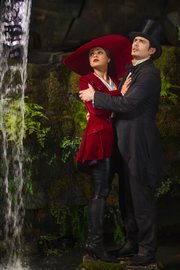 Mila Kunis as the witch Theodora and James Franco as Oscar Diggs in “Oz the Great and Powerful.”

The new 3-D extravaganza “Oz the Great and Powerful,” out March 8, is the second movie Disney has produced that’s set in the mystical Land of Oz, though you may not recognize the studio’s first foray into novelist L. Frank Baum’s fantasy word. Here’s a hint: It doesn’t star Judy Garland and it is more faithful to its source material than the revered 1939 musical “The Wizard of Oz.”

“Return to Oz” was an unofficial sequel to “The Wizard of Oz,” using the second and third books of Baum’s series (“The Marvelous Land of Oz” and “Ozma of Oz”) as inspiration — and was a flop upon its release in 1985. Critics were equally unkind to this non-musical Oz adventure, with Janet Maslin of The New York Times proclaiming that “children are sure to be startled by the film’s bleakness.”

That may seem like a strange comment but perhaps not completely out of line, considering that “Return to Oz” is the lone movie to be directed by Walter Murch, the Oscar-winning sound designer/editor of “Apocalypse Now.” Murch didn’t shy away from the darker tones of Baum’s novels, which often avoided common devices like strict moral lessons and romantic interests.

“Return to Oz” is now considered a cult classic, partially for how strikingly different its visual effects are compared to today’s computer-generated movies. It features a lot of stop-motion effects, creepy-looking animatronic puppets, and claymation “Nomes” made of living, breathing rock.

“Oz the Great and Powerful,” on the other hand, is full of digital effects and was mounted on a gigantic scale by director Sam Raimi, best known for the first three “Spider-Man” and “Evil Dead” films. Before all of the heavy postproduction tinkering took place, about 30 sets were built on seven sound stages in Pontiac, Mich.

The Land of Oz on display in the new film features freshly designed versions of the Yellow Brick Road and Emerald City, as well as Whimsie Woods, the Dark Forest and China Town — where all the creatures are made of porcelain. Oscar-winning production designer Robert Stromberg oversaw the entire affair.

“Many other projects that I have done have been much more virtual,” Stromberg says in a press release. “I think in this particular case, there was a solid reason that I pitched to Disney and Sam Raimi that we should build sets on soundstages. I saw this film as having almost a theatrical stage quality. If we were to just go out and build a Yellow Brick Road on a hillside in Ireland for instance, it wouldn’t have the same feeling that we have when we think of the fantastical Land of Oz — it would be too real.”

It’s that same world that got several of Baum’s “Oz” books banned in libraries and schools across the country, as they were considered by some to be too fantastical for children and not serious literature.

If “Return to Oz” is a sequel of sorts, then “Oz the Great and Powerful” is a prequel, although it has no direct correlation to any one of Baum’s stories. Using the first book, 1900’s “The Wonderful Wizard of Oz,” as inspiration, screenwriters Mitchell Kapner and David Lindsay-Abaire created an origin story that depicts how a small-time carnival magician named Oscar Diggs (James Franco) became the great wizard. The movie borrows from adventures throughout the Oz series and includes some loving nods to the 1939 film as well.

One nod that won’t be in the new “Oz” are Dorothy’s famous ruby slippers. Warner Bros. still owns the rights to the iconic shoes, which were originally silver in Baum’s books, and refused to let Disney use them. This is also the reason we won’t be seeing the Scarecrow, Tin Man, or Lion — as well as at least a partial impetus for Stromberg re-imagining the Yellow Brick Road and Emerald City.

Kansas is represented in “Oz the Great and Powerful” much the way it was in “The Wizard of Oz”: In black and white. The 3-D is also dialed down, and the soundtrack is even in mono. A low-rent, dusty carnival is the place that the magician needs to escape from if he is to chase his dreams. Once he arrives in the eye-popping Land of Oz, the aspect ratio goes from 1:66 to 2:40 widescreen and everything is in full surround sound.

How the negative imagery depicting Kansas in the 1939 “The Wizard of Oz” has affected the way people view the state ever since its release (and why Kansas embraced it so heavily, building an Oz museum in Wamego and mounting a ‘Land of Ahs’ marketing campaign) are perhaps subjects for another article, but things don’t look to be too much different in this new movie.

In contrast to “Return to Oz,” “Oz the Great and Powerful” promises to have a more uplifting tone, even though its main character starts out the film as a flawed person.

“This is a guy bluffing his way through life because he doesn’t have real magic powers like these witches do, who can become their leader and get Emerald City back from the Wicked Witch,” Kapner says in a press release. “I liked the dynamic that people expected him to be this powerful wizard, which he knows he’s not. Yet, he can claim this throne, and essentially be the king if he convinces enough people. Along the way, he realizes it’s not just about him. He has to do it to save these people.”