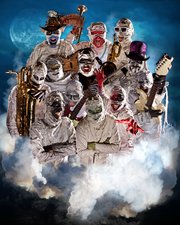 Here Come the Mummies, a band of funky "undead" mummies, will play Wednesday at the Granada.

Here Come the Mummies will perform at 7 p.m. Wednesday at the Granada, 1020 Massachusetts St. Tickets cost $16 in advance and $18 at the door.

Everybody has a dead rock star or two they wish they could have seen before they checked out to that great gig in the sky. Well, a bevy of long-since-buried rockers have been unearthed and will take the stage in Lawrence this week.

Here Come the Mummies, an outfit of about a dozen musicians decked out as ghouls in bandages who play the dead angle to the hilt while banging out randy tunes on guitars, bongos, keys and horns, will take the Granada stage March 13 as part of their 2013 Cryptic Tour. They stay in character onstage and off, which can make for some interesting conversations about what life (and death) is like for a mummy.

Java, percussionist/vocalist and mummy capable of answering email, recently answered a few questions about the band’s upcoming Lawrence show and how a bunch of dead folks formed a funk/rock/salsa fusion band. As the backstory goes, an archaeologist unearthed the Egyptian hell raisers in 1922, and they’ve been searching for the perfect groove since.

Like most musicians who go without practicing for a while, it must have taken some time for the mummies to shake off the rust after being dug up.

“In a word, yes, but we have had nothing but time to get limber since our unearthing,” Java says. “Now, our secret is to not get rusty through lots of repetitive lunging.”

Evident in some of their songs and emails is a raunchy, naughty sense of humor. Plenty of double entendres show up in songs such as “Pants” and chuckle-inducing lines abound amid the horn licks and salsa-tinged rhythms.

“I attribute my entire sense of humor to being at Don Rickles’ Bar Mitzvah. His grandma was really funny,” Java says of the humorous influence in their songs, before going on to explain how funk and Caribbean vibes found their way to a bunch of dead Egyptians. “After an extended stay in Havana during the 1950s, we had a permanent vision glued to the inside of our dusty skulls of the Latin ladies of the sun dancing to those styles.”

While some might write them off as a novelty act — they are a bunch of guys and gals playing instruments with painted faces and wrapped in bandages after all — the mummies are tight musicians who have played to huge crowds and caught the attention of big time acts, opening for the likes of P-Funk and Al Green.

So how did a bunch of stiffs land such high-profile gigs?

“Dunno ... wish we could figure out that secret. I think our agent must have told them we were the Osmonds,” Java says.

Here Come the Mummies are confident their funk — both auditory and olfactory — will not only get people dancing but also earn them the title of Lawrence’s most famous dead people.

“Not to boast, but you should see us juggle cats: something most dead dudes don’t do so well. So, yes, we will,” Java says. “Better prepare the plaque and key to the city basement.”