Abolitionist John Brown has been famously depicted in a mural done by Kansas artist John Steuart Curry in the State Capitol building in Topeka, completed in 1940. The mural portrays Brown almost as an Old Testament prophet with a Bible in one hand, a rifle in the other. 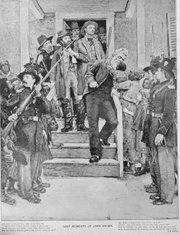 The last moments of John Brown are depicted in this 1885 drawing. The abolitionist, who had fought to make Kansas a free state, attempted to seize arms from the U.S. arsenal at Harper’s Ferry, Va., to lead an insurrection to end slavery. He failed and was hanged as a criminal. 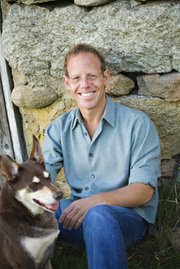 Many people debate the tactics of John Brown. What they don't dispute is that the famous abolitionist changed the course of American history by, in effect, sparking the Civil War.

Two men who have studied and written about Brown extensively will talk in front of a live audience at 7:30 p.m. Thursday, April 4, at Liberty Hall. The event, "Reconstructing John Brown," is part of the Lawrence Public Library's year-long 1863 Commemorate Lawrence observance of the 150th anniversary of Quantrill's Raid.

Pulitzer-Prize winning journalist and historian Tony Horwitz will be interviewed by Jonathan Earle, a professor of history at Kansas University, on the life and legacy of the anti-slavery fighter. Horwitz wrote the book "Midnight Rising: John Brown and the Raid that Sparked the Civil War" about Brown's surprise 1859 attack on a Harper's Ferry, Va. (now West Virginia), armory to free and arm slaves. Kansans might remember Brown more for when, in response to the May 1856 sacking of Lawrence, he killed five slavery supporters in Pottawatomie and led abolitionist forces at the Battles of Black Jack and Osawatomie.

Horwitz grew up in the nation's capital, about 60 miles from Harper's Ferry. A Civil War buff, he often wondered what started the conflict in the first place. That curiosity led him to Brown.

Horwitz's research eventually brought him to eastern Kansas, where Earle, who calls Horwitz "one of the best popular history writers out there," and Lawrence historian Karl Gridley took the author on a tour of the sites of Brown's most famous battles. Along the way, Horwitz learned just how much of an impact the state had on the fight to end slavery.

"The Civil War essentially began in Kansas," Horwitz says. "This is a surprise to many Americans outside your region. They know the phrase 'Bleeding Kansas' but they don't know how critical Kansas was."

Said Gridley: "I don't know if there would have been a Bleeding Kansas if there wasn't a John Brown. … He was very involved in the direction of Kansas and the direction Kansas would take in the Civil War and the civil rights movement."

During the course of his research, Horwitz came across others things that surprised him about Brown.

"He was by no means a lone gunman. He not only had many men fighting with him … but also tremendous support behind the lines from very prominent Northerners, including transcendentalists, wealthy businessmen, figures like Frederick Douglass," the author remarked. "Another thing is that his life up to Kansas was in some ways quite conventional. He was a businessman, a family man, a devout Christian; his ancestors fought in the Revolutionary War. He wasn't from the fringes of American society."

To this day, people argue over Brown's methods. He saw violence as the only way to overturn slavery, which was itself a violent act.

"He's a very problematic figure," Horwitz says. "I think most of us today feel he was on the right side of history in believing slavery was the great sin of our nation and had to be purged. But his tactics made many people uncomfortable … Unlike most other abolitionists, who were devout pacifists, he felt slavery was a state of war and must be met in kind. … I think the Civil War suggests he was right in believing that only bloodshed could resolve this conflict."

Prior to Brown, Earle says, abolitionists had tried using moral suasion, or convincing slaveholders that they were sinning in the eyes of God.

Even supporters admit Brown wasn't without his mistakes. Earle cites his ineffective plan to give blacks farmland in upstate New York, as well as the Pottawatomie massacre, where he and his men hacked apart with broadswords five pro-slavery settlers who themselves didn't own slaves.

Brown's influence can still be felt in modern-day America. Earle points to Vietnam War protestors, the Black Panthers and anti-abortion activists as groups who have looked to Brown for inspiration.

"John Brown is right in the middle of our society," Gridley says. "It's like that mural in Topeka, with John Brown towering above both sides with a rifle and a Bible."

Horwitz says the rights to turn his book into a cable-television series are currently being negotiated.

The program is free and open to the public. Doors open at 7 p.m. Books about Brown by Horwitz and Earle will be available for sale at the event.

Well, he did order his sons to pull five pro-slavery men out of their cabins at Pottawatomie Creek and hack them to death in front of their families.

No, he didn't kill them in front of their families.... and while it doesn't excuse it, there is some evidence that says the proslavery men could have, or did, threaten abolitionists in the area.

I am not sure he ever voted either. But his sons owned land and voted.

I dont consider him a Kansan either, but we were outvoted (since he was named one)

Mom, you win the prize for the most vacuous statement of the month. What you basically said was that Brown's Pottawatomie massacre was fine because he didn't do the killing in front of the family and the victims may have previously said something that displeased Brown. The victims had surrendered and were unarmed when the barbaric act was done near the Doyle cabin. The victims got to watch each other being hacked to death, which probably counts as being in front of family. The Doyles did not own slaves but their heritage and the times did make them pro-slavery. John Brown was on the right side. John Brown was also a psychopathic killer. Had someone else like him been in charge of his hanging, Brown would have been tortured to death..

I think you are putting too much into my statement, and I am refraining from telling you what I really think about your statement. BUT I never said his crime was okay. Actually, if you would have asked, I would have told you that I disagree with his crime, although his greatest wish to end slavery was admirable. It was a different way of life back then and the territory was in great turmoil. There was alot going on during that time.
I insinuated from the statement that the families of the men witnessed the murder and they did not. Some who lived in the area reported being threatened by the murdered men for their abolitionist or anti slavery views. Dutch henry Sherman and his brother william had many enemies. They were looking for henry but found william.
And I wouldn't call John Brown a psychopathic killer. I don't think he WAS crazy. A little delusional that harper's Ferry would work, but I dont think he was insane.

Please put a video or transcript of the event tonight onto a LJ web page!