Behind the Lens: Lighting up the night

New murals line both walls the length of the Pinckney School tunnel beneath 6th Street thanks to artists from Van Go, Inc. and help from the Pinckney PTO, the city of Lawrence, Lawrence Schools Foundation, OWL Assoc. and the Pinckney Neighborhood Assoc. 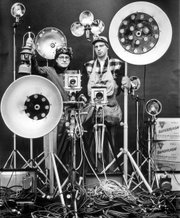 My wife and I rode Amtrak on a recent vacation. We boarded the Southwest Chief at dawn at the renovated Santa Fe Station in East Lawrence. Pretty convenient considering it’s on our street and only six blocks from our front door.

When you ride the train and eat in the dinning car, you are randomly seated with other riders, and conversation can turn many directions. We had one meal with proud grandparents of one of the top mountain-bike riders in the world, but unfortunately I have forgotten his name.

The husband was a B-29 pilot in World War II and claimed to have been the one “responsible for winning the war.” Of course, he also tried to pass himself off as a former Cleveland Browns football player. His wife would just punch him in the arm and say, “Oh, you.”

Another conversation combined the interests of trains and photography, and I recalled one of my favorite photographers, O. Winston Link. Starting in the mid-’50s, Link took a passion to photographing steam-powered trains that ran on the Norfolk and Western Railway. Within five years, he produced over 2,400 images, most on large-format cameras.

The amazing thing about many of Link’s images is that they were taken at night. He once said, “You can’t move the sun, and you can’t move the tracks, so you have to do something else to better light the engines.” So he built his own flash equipment and placed it in landscapes where trains passed. He even incorporated people. One image captures a group of kids splashing around in a swimming hole while in the distance, a train crosses a bridge trailing black smoke. You can check out some of his work at this New York Times article and linkmuseum.org.

Four is the largest number of flashes I’ve ever used to light a scene and that was for Allen Fieldhouse for basketball coverage. And that isn’t even a dark place. But last week I did have to light up the night — sort of.

New murals have been mounted inside the Pinckney School tunnel that runs beneath Sixth Street. That’s a dark, dank place, and while there are a few small ceiling lights, they are insufficient for taking photographs.

I chose to use two flashes on light stands. I placed one flash behind my camera position and aimed it along the wall on my right, illuminating one large mural in the foreground. At a location where light from my first flashes faded — about 15 feet away— I placed my second flash, aiming it farther down the tunnel toward an exit. This provided a continuous light down about half the length of the tunnel. I then waited for children and parents to pass through the lit spaces.

Because the tunnel is only about 5 feet wide, I had no way to avoid photographing my second flash. For equipment, I used a Nikon D300 with a Nikon Fisheye lens. My lights were a White Lighting 800 and Paul C. Buff Einstein 640, both off the camera on light stands and powered by a battery pack. I fired the flashes simultaneously with a wireless remote. My lights added plenty of light and my final exposure was a shutter speed of 1/100th, an aperture of f/5.0 and ISO 200.