With the superhero action-comedy of “Iron Man 3”and the period 3-D extravaganza of “The Great Gatsby” opening these last two weeks, the summer movie season has already officially kicked into high gear.

Nobody ever accused Hollywood of being original, so it’s no wonder that so many sequels and reboots are on deck for 2013. The big question is whether any new franchises will be able to separate themselves from the pack this summer.

The buzz on “Star Trek Into Darkness,” opening Thursday, is enormous, and rightfully so. Director J.J. Abrams successfully rebooted and reinvigorated the “Star Trek” series in 2009 with a brash confidence that would make James T. Kirk proud, so expectations are big for his sophomore trek. Whether Abrams returns for a third outing with the Enterprise is very much in question, especially since Disney tapped the wunderkind to helm “Star Wars: Episode VII.” 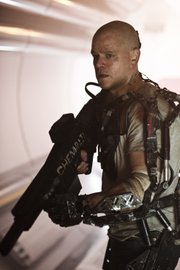 May 24 brings more familiarity with the sequels “Fast & Furious 6” and “The Hangover Part III.” Against all odds, “Fast Five” was a fun, over-the-top thrill ride and the highest-grossing film in the series, while “The Hangover Part II” was universally dismissed as a sad retread. Bradley Cooper and company would do well to break the mold for their no doubt untriumphant return to Vegas, and all “Furious” needs to succeed are a couple of amazing action set pieces and some self-aware humor.

Opening against those films that same weekend is Blue Sky Studios’ computer-animated children’s adventure adaptation “Epic” and “Before Midnight,” the third movie in an unlikely indie franchise starring Ethan Hawke and Julie Delpy that won rave reviews at the Sundance Film Festival in January.

Even after the abysmal flops “The Last Airbender,” “The Happening,” and “Lady in the Water,” Hollywood keeps giving M. Night Shyamalan big-budget movies to direct. “After Earth,” out May 31, is co-written by Shyamalan, but based on a story by Will Smith — and co-starring his son Jaden Smith (“The Karate Kid”) — about a father and son who crash land on a post-apocalyptic Earth.

Other films opening that weekend include “Now You See Me,” an odd-looking thriller about modern-day Robin Hood-types (Jesse Eisenberg, Mark Ruffalo and Woody Harrelson) who use magic tricks to steal money and give it to their audiences, and “The East,” about a former FBI agent (Brit Marling) who falls under the spell of an anarchist group she’s trying to infiltrate.

June 7 brings “Wedding Crashers” co-stars Vince Vaughn and Owen Wilson back together for “The Internship,” which may be a Google commercial masquerading as a feature film. As two laid-off technology Luddites, the duo must compete with a bunch of fresh-faced college grads for a Google internship.

“Man of Steel” debuts June 14 and reboots the Superman franchise with “300” director and slow-mo violence fetishist Zack Snyder in the director’s chair with “Dark Knight” director Christopher Nolan on board as producer. Here’s hoping that Nolan can curtail Snyder’s more base desires and focus on coherent storytelling for a change.

The end-of-the-world comedy “This is the End” marks the directorial debut of co-writers Seth Rogen and Evan Goldberg and has Rogen, James Franco and Jonah Hill playing fictionalized versions of themselves. Also on June 14, Sofia Coppola’s “The Bling Ring,” which is based on the true story of a group of girls who robbed celebrities’ homes while tracking their whereabouts on the Web, opens.

Expensive reshoots, delays and radical script changes have plagued “World War Z” since it was supposed to begin production in 2009. There’s a lot at stake for Brad Pitt, who not only stars in the film but is also one of its main producers.

Closing out the month is the girl-buddy comedy “The Heat” starring Melissa McCarthy and Sandra Bullock.

Armie Hammer’s “The Lone Ranger” gets his kicks with Johnny Depp’s dreadlocked and war-painted Tonto on July 3. The antidote to these big-budget studio action comedies might be “The Way Way Back,” an indie comedy opening July 5 that stars Steve Carell and Toni Collette and was a big hit at Sundance.

Carell is also back voicing Gru in the animated sequel “Despicable Me 2,” which opens July 3. Universal is so sure this will be a hit that “Minions,” a film about Gru’s cute, yellow henchmen, is due to be released sometime around Christmas 2014.

“Pacific Rim,” the movie that looks like Godzilla meets Transformers, opens July 12. The hope that it may be something more than that lies in its co-writer and director Guillermo del Toro, who, between mounting the “Hellboy” movies, directs brilliant suspense thrillers like “Pan’s Labyrinth.”

On the other side of the coin, Adam Sandler hangs out with old pals David Spade and Chris Rock again, and cobbles together something called “Grown Ups 2” out of the material.

“The Wolverine” is a one-off adventure starring Hugh Jackman as the adamantium-clawed antihero Wolverine, far away from the X-Men in Japan. The film, which opens July 26, is based on a hugely popular limited-run comic written by Frank Miller and Chris Claremont.

And to end July, get ready to claw your eyes out: “The Smurfs 2” arrives July 31!

Two more iffy franchises close out the summer movie season on Aug. 16. Kids with superpowers from the Greek gods try to retrieve the Golden Fleece in the present-day adventure sequel “Percy Jackson: Sea of Monsters.” Meanwhile, the rated-R superhero spoof “Kick-Ass 2” reunites Chloë Grace Moretz and Aaron Taylor-Johnson as teenage costumed crimefighters, with an extra comedic kick from Jim Carrey, under heavy makeup, as a guy who calls himself Colonel Stars and Stripes.