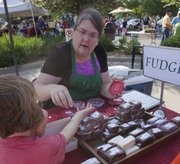 Janice Nesler-Loux serves up her bacon-laced fudge at the Lawrence Farmers Market. 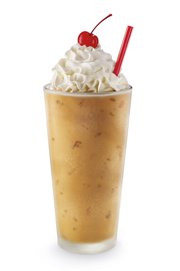 The peanut butter bacon milkshake, which Sonic added to its menu this month. 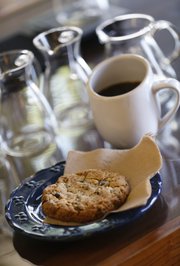 A peanut butter and bacon cookie with chocolate chips at Alchemy Coffee, 1901 Massachusetts St., Suite B.

Bacon: it’s not just for club sandwiches anymore. Putting it in sweet treats, it seems, is now what you might call “a thing” (even Sonic’s doing it). Here are five savory/sweet tastebud trips to be had in Lawrence.

Sonic rolled out a new, 25-choice summertime milkshake menu last week. The hands-down most unusual choice is peanut butter and — you guessed it — bacon. Sonic says they want to give “adventurous guests options they never knew possible.”

These giant cookies — which also have a generous amount of chocolate chips in them — are made by Chelsea’s Bakehaus in the River Market neighborhood of Kansas City, Mo. Alchemy gets fresh shipments on Fridays.

Bryant Bickel works through the night making his lineup of crazy donuts to sell bright and early Saturday mornings at the market. This one, with maple frosting and crumbled bacon for sprinkles, is among his most famous.