Matt Reimer, 9, holds a color print of one of the imaginary creatures he's drawn to inhabit a make-believe planet he calls Matthewland. Prints of Matt's creatures will be for sale along with national and local artists' work at an upcoming event hoped to raise money to research a cure for Matt and other boys with a rare genetic disorder called X-linked adrenoleukodystrophy. 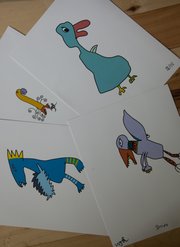 Matt Reimer, 9, has been imagining and drawing creatures like these — who live on a planet called Matthewland — since he was diagnosed about two years ago with a rare, degenerative genetic disorder. An upcoming art auction will raise money to research a cure for Matt's disease.

The Art of Curing Matt: An Auction to Benefit Boys with ALD is set for 6 p.m. to 9 p.m. Saturday at the Eldridge Extended, 201 W. Eighth St.

Prints of Matt Reimer’s creatures from Matthewland will be for sale, and work by national and local artists will be up for silent and live auction. In addition to the art and other memorabilia, four vacations — a South African photo safari, a trip to Maui, a trip to Washington and a week at a Tuscan villa in Italy — will be auctioned.

The auction’s featured artist is Jeffrey Owen Hanson, a visually impaired Overland Park teen battling a genetic condition called Neurofibromatosis. Hanson, who has been featured in national media and counts celebrities among his clients, has raised more than $500,000 for charities through sales of his paintings.

Proceeds from The Art of Curing Matt will be donated to the Myelin Project, a charity that funds myelin research to combat disorders like ALD.

Eight-year-old Matthew Reimer takes a dose of Lorenzo's Oil on Friday, Feb. 24, 2012, as his mother, Emily, prepares a snack in the background. Matthew was diagnosed with a rare, complex genetic disorder called X-Linked Childhood Adrenoleukodystrophy last year. He takes the oil as part of a study at Kennedy Krieger Institute in Baltimore. The oil has been shown to slow progression of the disease.

Bhrams use their specialized mini-arms to cut into trees for food, and Tiaills flaunt their many curly tails. The creatures go about their lives under the umbrella of Midmattebrainatology, their land’s own mythology.

Matt Reimer’s imagination, as one adult friend describes it, is boundless. His 9-year-old body, however healthy it may appear on the outside, is not.

Family and friends have teamed up to create an event inspired by one of Matt’s favorite hobbies — art — to raise money for research that could mean the difference between life and death for Matt and other boys with his rare genetic disorder, the X-linked childhood form of adrenoleukodystrophy, or ALD.

The Art of Curing Matt: An Auction to Benefit Boys with ALD is set for Saturday in downtown Lawrence. Work by national and local artists will be auctioned to benefit the Myelin Project, a charity that funds research to find a cure for diseases such as ALD.

Colorful prints of Matt’s creatures from Matthewland will be for sale, too.

The prints themselves don’t explain the characters’ intricacies, but in Matt’s head, they’re more than just drawings — they’re part of an entire ecosystem.

With both wings and paddle-shaped hands, the Scrog swims and flies, using the sharp teeth in his beak to devour fish. The Squic is “sort of like a scorpion squirrel,” Matt says, though he’s not usually known to attack unless provoked. Bhrams, the ones that eat the innards of trees, are part mammal, part duck.

Matt estimates he’s conjured up at least 100 characters to populate Matthewland, drawing in church or when he has time between homework and three-times-a-week swimming practice with his Ad Astra Area Aquatics team.

‘He just goes for it’

Lawrence resident Stacey Lamb, a consulting artist at Hallmark Cards in Kansas City, Mo., first spotted Matt drawing “feverishly” in the pew in front of her at church.

A fellow Sunday morning doodler, Lamb knew she’d spotted a kindred spirit. She introduced herself after the service and asked Matt if he was an artist.

Lamb’s job at Hallmark involves brainstorming and ideas but that when she’s putting pencil to paper, it’s usually for kids cards and cartoons. She said Matthewland has been a huge inspiration.

“The thing that I love about Matt is that his imagination is boundless,” Lamb says. “It’s kind of funny that when you become an adult, I feel that my imagination has kind of been lost; I’ve put a lot of boundaries in my own imagination.

Lamb and Matt’s parents, Emily and Troy Reimer, teamed with other acquaintances to organize the auction.

“I cannot believe the kindness and generosity from artists who have given us some amazing work,” Lamb says. “It just blows my mind.”

Matt started drawing about two years ago. It was right after an emergency room visit for what his parents thought was severe flu, but what tests revealed was much more serious.

ALD, a degenerative disorder, attacks the brain by causing damage to the myelin sheath, an insulating membrane surrounding nerve cells, and destroys adrenal gland function, according to the National Institute of Neurological Disorders and Stroke. If the disease progresses, it leads to symptoms such as vision loss, seizures, speech problems, progressive dementia and, eventually, death.

While bone marrow transplants can slow neurological deterioration in children, the institute notes, the operation is extremely risky.

For a patient like Matt, his parents say, the risk is too high for the potential payoff. For now, Matt’s daily adrenal medication, low-fat diet and use of Lorenzo’s Oil — created by a couple whose quest to find a cure for their son with ALD inspired the 1992 film “Lorenzo’s Oil” — are keeping symptoms at bay.

But to get the oil, which the Food and Drug Administration classifies as an experimental drug, Matt participates in a clinical trial — and the study’s future is uncertain.

Matt’s parents are not optimistic that if or when the study ends, Lorenzo’s Oil will be available at all. They want to raise money for the Myelin Project in hopes that breakthroughs in research could help develop gene therapy to fight ALD in boys like Matt.

“It’s part of his DNA — how do you fix that?” Emily Reimer says. “The gene therapy is the biggest hope for the future.”

In the meantime, Matt takes his daily medications and follows his strict diet with a positive attitude. He knows that if he doesn’t, he’ll get sick.

Because he’s so young, his parents don’t discuss the disease’s ugly “what-ifs” with Matt. They want him to keep doing his homework, working on his butterfly stroke and drawing whatever his imagination can dream up.

“You don’t want them to be scared,” Reimer says. “We’ll do all the worrying for him.”