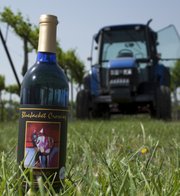 BlueJacket Crossing's 2009 vintage of the Off-Dry Vignoles was a gold medal winner at the Finger Lake's International Wine Competition.

Instead of the typical national best-sellers, expect more regional grape varietals like Seyval, Vignole, Chambourcin, Cynthiana and Concord at Winesong at Riverfest.

The following 15 Kansas farm wineries are expected to provide tastings at this year’s event.

Patrick Guilfoyle likens the inaugural Winesong at Riverfest event to a black hole, in both a good and a bad way.

Last year’s wine festival had one tent for 14 wineries, a single food station and the live music — and a crowd so much larger than expected that organizers had to turn away 400 to 500 people an hour and a half into the four-hour event.

When the “floodgates” opened, Guilfoyle said, “people literally were drawn like an uncontrollable magnetic force to the tent, and we stuffed the sardines in the can.”

Organizers learned two big lessons, Guilfoyle said: People — a lot of people, it turns out — are interested in trying Kansas wine; and in order to accommodate them, the event needed some major tweaking.

“We just dramatically changed the event, and we got bold enough to expand some of our investment in it,” said Guilfoyle, event co-chairman, De Soto city administrator and Kansas wine fan.

Here’s what to expect this year:

• Tickets won’t be sold at the gates. They must be purchased in advance through the Winesong website, winesongatriverfest.com. Attendees must present a photo ID showing they are at least 21 to be admitted. Each $20 ticket covers a souvenir wine glass, 10 complimentary wine samplings of your choosing and an assortment of appetizers.

• Picnics are welcome. Not only will guests be allowed to pop the cork on bottles of wine purchased at the event, they’ll also be allowed to bring in their own food to enjoy in addition to the provided appetizers. If you want to sit outside the tents, don’t forget the lawn chairs.