New exhibit strings together artwork of more than 70 artists 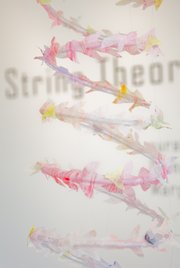 String Theory 13 exhibit is at the Lawrence Arts Center May 17 - June 29. The work was created by over 70 area artists and community groups.

String Theory 13 will be on display in the front-window gallery of the Lawrence Arts Center, 940 New Hampshire St., through June 29. There will be Final Fridays receptions this Friday and June 28 featuring music performances and demonstrations.

“String Theory 13” was conceived by artist Margaret Rose who, after learning about the concepts, became inspired. So inspired that she called her friend, Diana Dunkley, and together they curated a show for the 1109 Gallery that ran several years ago. But like the ever-expanding universe, they envisioned a larger show, one that would include more artists and more ideas.

“We always had this gallery in mind,” says Dunkley, referring to the glass-fronted space at the front of the Arts Center, 940 New Hampshire St.

The exhibit, which runs through June 29, includes work from over 70 local artists. Like the universe, the show is colorful, diverse, mysterious and, most of all, thought-provoking. Participants created a ‘string’ using the broad theme of String Theory to inspire creation and collaboration. Consider Anson the Ornery’s “Eleven Dimensions of Faith,” which sits in the corner of the room. It is easy to overlook the simple white box hanging on the wall, but anyone who looks into the viewfinder will see a beautiful painting of a string hung so it can only be seen through a series of mirrors. The piece illustrates that dark matter cannot be seen directly, but instead is only inferred by the waves that it emits.

There is also Laurie Culling’s “Button, Button,” a collection of 1,338 buttons attached on two nine-foot wires and shaped like a double helix. The piece was created to remind us that our world is filled with tiny vibrating filaments.

“We are expressions of these strings, connected to everything in the Universe,” she writes in her artist statement. “Buttons have ‘personalities’ that reflect energy of individuals who create them.”

Artist Sandy Craig McKenzie created a mobile called “Trysting Hero,” an anagram of “String Theory.” She produced an entire book of anagrams for the show, basing her project on the idea that language is like the strings that connect people across time and space. Letters string together to form words; words form sentences; and sentences are a way to transmit ideas that connect us to one another. Individual books of the anagrams with their accompanying photographs and drawings will be available for $20.

Rose and Dunkley imagined all kinds of artists would be involved in the exhibition, including vocal and performing artists. Anson the Ornery will perform music at 6 p.m. Friday, followed performances and demonstrations by Steven Ramberg and Paul Veerkamp.

Co-curator Dunkley couldn’t be more pleased with the way the exhibit all came together.

“The artists here really pushed the envelope when they were presented with this project,” she says. “I think this exhibit reminds us that sometimes you need someone to (tap you on the shoulder) to make you stop and appreciate art.”