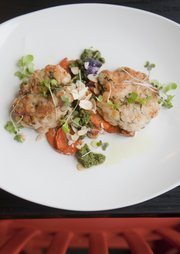 One of the vegetarian dishes at Merchants Pub & Plate is Kale and White Bean Griddle Cakes, served over roasted heirloom carrots. 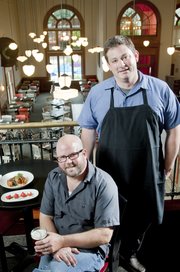 There’s pimento spread from a jar squished between slices of Wonder bread.

Not only is the menu item a personal favorite of both chef/owner TK Peterson and owner Philip Wilson, it’s indicative of what they’re trying to do at their new venture.

Plus, it goes well with beer.

Merchants opened late last month at 746 Massachusetts St., in the historic Merchants Bank building formerly home to Teller’s restaurant. The focus is approachable but interesting farmhouse-style food that uses as many local ingredients as possible and meshes with the restaurant’s other focus: craft beer.

The new pub boasts 30 beers on tap — all craft, all from stateside breweries. Beer from Lawrence and the surrounding region accounts for about 40 percent of the taps. There’s a variety of imports available in bottles.

Wisely, the taps at Merchants are numbered, with corresponding beers displayed on a big chalkboard that can be easily updated as seasonal and limited-availability brews come and go.

The cocktail menu features handcrafted creations spiked with unexpected pops like pink peppercorn syrup (in the lemon vodka-based Modern Love), fennel fizz (in the gin-based Sea Phog) and even sumac (a Mediterranean spice added to red wine, lavender syrup and lemonade to create the Laureate).

Merchants opened with a late-summer/early fall menu. Peterson expects to transition to a fall harvest menu later in the season.

Appetizers, salads, sandwiches, soups, sides and entrees are on the front. A big map of Kansas with green dots corresponding with milk, meat and vegetable producers the restaurant buys from is on the back.

Peterson cites his Rare Hare Rabbit Cacciatore — another personal favorite from the menu — as one example. He can only get so many rabbits from the Leon farm per month, so he expects the dish to sell out from time to time.

Peterson hopes to preserve some of summer’s bounty by pickling and canning, which will enable him to continue serving locally grown items into the winter months.

While Teller’s was known as a special-occasion restaurant, Wilson and Peterson hope Merchants will become an everyday destination.

“We really wanted to open ourselves up to the entire community,” Peterson says. “There’s a price point for everybody who wants to come.”

Sandwiches cost $9 to $12, and entrees range from $15 for the Mac and Cheesemonger (baked cavatelli tossed in brie, gouda and gruyere) to $32 for the Creekstone Farms Ribeye (served with crispy potatoes, blistered broccolini and fried tobacco onions). The bar snacks menu features small plates at $3 to $6 each.

Merchants has two daily happy hours, traditional from 4 to 6 p.m. and late-night from 9 p.m. to close.

Peterson grew up in Lawrence and Manhattan, completed his chef apprenticeship through Johnson County Community College and has worked at a number of Lawrence’s upscale restaurants. Most recently, he was executive chef at the Oread hotel.

Wilson, an Overland Park resident and native, has also spent his career in restaurants and catering. He was general manager at Teller’s until he and Peterson decided to buy it and renovate it for their new restaurant concept.

The pair gutted the kitchen, removing 33 tons of ovens and replacing them with all new, energy efficient equipment, Peterson says.

Updates to the 235-seat dining room with soaring ceilings were primarily cosmetic — out are the looming abstract murals and low-lighting, in is light-colored neutral paint to highlight crown molding and other architectural features and a red-to-cream ombré wall behind the bar inspired by Kansas sunsets.

The chef's table — a six-chair high-top — provides a front-row seat to the action in the kitchen. Merchants takes one reservation per night for the table, where instead of ordering from the menu guests can choose to be surprised with a special meal prepared by Peterson.

The last major piece of their renovation, a rooftop bar and garden, will wait until spring.

Peterson said there’s a door in the top tier of the restaurant that had been walled over. The plan is to open it up, creating access for 30 to 40 people to sip their craft beer en plein air. Like the menu, that part of the restaurant will be seasonal.

it sounds nice but sadly will be out of my budget

We think our Snacks menu is pretty affordable – 8 items all under $6 each. Come in and give it a try!

Thanks, Aiko! We're trying – can't wait to have you again soon.

Had the white bean and kale cakes.....AMAZING!