Diego Teo of Mexico City and assistant Dasha Chernysheva work on an installation at the Spencer Museum of Art. Visitors can watch Teo, the musuem's new international artist in residence, installing the multi-media exhibit through Oct. 16. It will remain on display through Jan. 5. 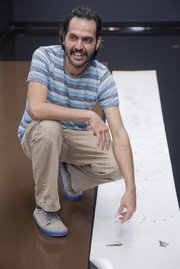 An installation by Mexico City artist Diego Teo, the Spencer Museum of Art's new international artist in residence, will include this scroll on which he illustrated a narrative — in a style inspired by Native American ledger drawings — of Comanche's role in the Battle of Little Big Horn.

Diego Teo of Mexico City works on an installation at the Spencer Museum of Art. Visitors can watch Teo, the musuem's new international artist in residence, installing the multi-media exhibit through Oct. 16. It will remain on display through Jan. 5.

A drawing from Mexico City artist Diego Teo's installation-in-progress at the Spencer Museum of Art.

Kansas University’s most famous equine resident is an integral figure in an art installation evolving now at the Spencer Museum of Art.

The story of Comanche, the sole U.S. Army survivor left on the field of the Battle of Little Big Horn, captivated and inspired the museum’s new international artist in residence, Diego Teo of Mexico City.

Teo arrived in Lawrence and began creating his multi-media installation last week. Over the next week and a half, visitors can watch the artist in action and see his work take shape day by day on the first floor of the museum, 1301 Mississippi St.

Teo’s last day in residency will be Oct. 16, but his exhibition will remain on view through Jan. 5.

Comanche himself won’t leave his post in KU’s Natural History Museum, where he long has been on display, preserved through the taxidermy of former KU professor Lewis Lindsay Dyche.

But the beloved bay horse will appear in Teo’s installation through a variety of artistic media — his likeness visually and spirit conceptually.

The Spencer typically plays host to one international artist in residence each year. Like past artists, Teo is expected to bring a fresh perspective to campus.

Curator Kris Ercums says much work has been done on the part of the Natural History Museum to accurately recontexualize Comanche. As an artist, Teo can take that a step further.

Teo’s past exhibitions have blended social engagement, historical understanding and local concerns, according to the Spencer’s exhibit description. His work addresses cultural identity, inequality, political violence, immigration, exclusion and borders. He has spent time living and working among indigenous people of Mexico, itinerant workers in New York and construction workers in Mexico City.

Teo — joined in Lawrence by fellow artist Dasha Chernysheva, his girlfriend, assistant and interpreter — doesn’t have a precise roadmap for how his installation will look. The creative process is part of what visitors will see.

But he does have plans for key components of the project, which he’s calling “Comanche is Dead”:

• Teo and museum exhibit designers are recreating Comanche in much the same way Dyche did, beginning by building a life-sized wooden armature covered in twine. Teo says he is considering a performance component that would involve a ceremonious burial of the wooden horse.

• He plans to capture real-time video of Comanche on display in the Natural History Museum and project it onto a scrim at the Spencer.

• The display will feature drawings and paintings, including a long scroll on which Teo has illustrated a narrative — in a style inspired by Native American ledger drawings — of the deadly battle and Comanche’s emergence from it. Other drawings will be enlarged and painted onto the wall.

• While Teo is working, visitors can only watch him through the Spencer’s circa-17th century Spanish “reja,” the gilded wrought-iron gate separating gallery 316 from the Central Court. The gate will remain closed for the duration of the exhibition (hint: go through your own “process of discovery,” Ercums says, and you may find another way in).

Teo says he intends to include some imagery people will understand immediately and some that is “poetic and abstract.”

Of many artists he met on a trip to Mexico last year, Ercums says Teo stood out because of his commitment to engagement, activism and ability to think outside the box. In addition, Teo is an educator, teaching and mentoring emerging artists at Mexico’s National School of Fine Arts.

“A museum can often be interpreted as a very static place,” Ercums says. “Bringing artists in to work in a museum in that way is really important.”

"Comanche the sole survivor of the Battle of the Little Big Horn..." Sarah, there were an estimated thousand native warriors that would have disagreed with that statement!

That sentence has been clarified above, thank you for the head's up! -Sara Shepherd, LJW

"Comanche, the sole U.S. Army survivor left on the field of the Battle of Little Big Horn..."

Actually, this is still not correct. The men of Lt. Col. Custer's 5 companies were all killed, but those of Major Reno's 3 companies, Capt. Benteen's 3 companies, and Capt. McDougall's company weren't.

There may be more misconceptions about the Battle of the Little Bighorn than about any other event in American history.