Brad Walters, owner of Basil Leaf Cafe, moved the restaurant from its original home in a gas station on Sixth Street to its new location in the former Joe's Bakery at 616 W. Ninth St. Walters knocked out counters and walls to expand the space, now decorated with rustic wood, wine bottles and a few vintage touches. 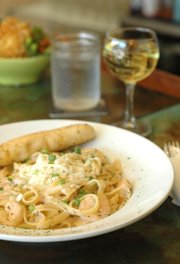 The Basil Leaf Cafe is now serving at its new location, inside the former Joe's Bakery at 616 W. Ninth St. As owner Brad Walters says, the Joe's sign painted on the door is a beloved piece of history, "it stays."

The view from a booth at Basil Leaf Cafe back in July 2013, before the restaurant moved out of the Miller Mart at 3300 W. Sixth St.

The Basil Leaf Cafe has made the move from a gas station startup into a standalone restaurant.

Gone are the canopy of clunky Christmas lights over the dining room, the churning slushy machines in the background and the foam boxes that were used to serve even dine-in meals inside the Miller Mart at 3300 W. Sixth St.

Carried over are chef/owner Brad “Walt” Walters and a handful of cooks, to-go and lunch menus posted at the hostess counter (after all, Basil Leaf built its reputation on about 90 percent carry-out orders) and menu favorites including the Tortellini Cordon Bleu and 5 Layer Lasagna.

New are tableside service, a full bar and a bigger menu — with everything served on real plates.

Since opening about two weeks ago, lunch service has been steady and there’s been a wait at dinnertime, Walters said.

“We pretty much doubled our size, although I don’t feel like we did,” he said. “It’s just bursting at the seams.”

Basil Leaf’s new dining room is about 1,400 square feet compared with its previous 700 square feet, Walters said. The staff has expanded from about five to about 15. The decor is cozy and rustic — wooden floors, tabletops and bars dotted with a few antiques, architectural remnants and pendant lights made from multi-colored wine bottles.

Walters described the menu as “good comfort food presented in a nice way.” Most dishes are Italian or American influenced, with a pinch of French.

In addition to a handful of decidedly comforting desserts (Baileys and Kahlua Chocolate Cream Pie and Bananas Foster Style Bread pudding, to name a few), there are separate lunch and dinner menus. At lunch — still ordered at a counter and brought to your table — offerings include sandwiches, salads and pastas. The dinner menu — ordered and paid for tableside — has a number of small plates and salads, about a dozen pastas and a half-dozen entrees.

Highlighting the dinnertime entree menu — and a best-seller with customers so far — is Walters’ new “Chicken Fried Filet of Three Meatloaf.” The meatloaf is made from ground pork, buffalo and beef then breaded, fried and served atop marsala-candied onion and sage demi-glace with smashers and vegetables on the side.

From the bar, there are beer, wine and specialty cocktails including a Vanilla Blueberry Fizz and Burnt Sugar Bacon Rum — dark rum infused with burnt sugar and bacon-caramel syrup.

At some point, Walters said, he may throw in some doughnuts to pay homage to his new location’s famous past.

Walters, who worked as a chef at several Lawrence restaurants, didn’t dream about opening his first solo venture in a gas station. But Miller Mart’s visibility was great, overhead was low and track record was good — both Tortas Jalisco and Biemer’s BBQ started in the same spot before expanding to stand-alone locations.

“There’s something about the gas station appeal,” he said. “It’s kind of like a hidden little treasure that people just buzz about.”

Walters credits starting small with helping him work up to where his is now. The new Basil Leaf Cafe is still small, but it provides a better opportunity for Walters to do what he’s passionate about, creating and serving good food.

So what’s next for the gas station?

It already has a new lease holder, Robert Douglas, with plans for a new restaurant.

The convenience store is closed for renovations but should reopen this weekend, and Douglas plans to open D-Lux Southern Fried Chicken there in November. In addition to making more space in the dining room, he said, he also wants to reopen the drive-thru window.

Walters said Miller Mart should be a good opportunity for its next restaurateur.

“If they have a good mind for food,” he said, “they can make it work.”