Laura Ramberg, a sculptor who also works in other mediums, won the 2013 Phoenix Award for Exceptional Artistic Achievement.

This is the second in a series of five stories highlighting winners of this year’s Phoenix Awards. Watch the Journal-World’s A&E section for profiles on the other awardees. 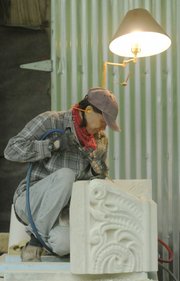 Laura Ramberg works on a 900-pound block of cottonwood limestone in her rural Lawrence shop. The sculpted stone is one of three pieces that Ramberg is completing for the Douglas County Courthouse. Ramberg and Oskaloosa stone carver Keith Middlemas are both sculpting new pieces to replace deteriorated stone sections.

Laura Ramberg practices — and teaches — what she calls “creative life.”

“Art-making is not just about making a product,” she says. “It’s about the creative process, so I think everyone can benefit from practicing artful living.”

Ramberg, a sculptor who also works in other mediums, won this year’s Phoenix Award for Exceptional Artistic Achievement. In her nearly 40 years in Lawrence, Ramberg has not only created all kinds of art but also taught it to people from all walks of life.

“Lawrence, Kan., is blessed with hundreds, if not thousands, of artists, but I know of few who have given so much to the community while continuing to create stupendous and important art in multiple genres and mediums at the same time,” Caryn Mirriam-Goldberg, Lawrence resident and past Kansas Poet Laureate, wrote in her letter of support for Ramberg’s nomination. “... She has a special gift for showing people the worth of who they are and what they have to contribute.”

Ramberg came to Lawrence in the 1970s to study painting at Kansas University. She says she soon realized she was better at 3-D art and switched her major to sculpture instead.

Her sculpture — particularly stone-carving — now graces a number of public places in and around Lawrence.

Ramberg was one of two artists who replicated ornate exterior sculptures, to replace the weather-damaged originals, during the Douglas County Courthouse renovation project that began in 2007.

Ramberg says copying another carver who was working more than a century earlier was almost like being mentored.

“That person is long-dead, but their art is still there,” she says. “It’s like meeting a new artist, and they’re teaching you.”

She also worked on the Kansas State Capitol restoration in Topeka, has carvings at Emporia State and other universities and created the stone lion sculpture at Leavenworth High School, to name a few.

In her non-commissioned art — much of it ceramic sculptures and tiles — whatever’s happening in Ramberg’s life usually shines through.

“It infiltrates my work,” she says.

At her rural Lawrence home and studio, Ramberg keeps bees, which have been a theme in recent pieces. After a trip to Brazil, where she was taken by the beauty and variety of the country’s pineapples, she began creating those, too.

On a recent visit to her studio, there were ceramic flower pots with lifelike faces, bending and curving abstract pieces and a churning, flowing vessel with multiple openings she’s calling “Blind Man Boogie” — Ramberg made it with her eyes closed.

Ramberg also dances, practices yoga and does juggling and clowning — all of which she has also taught.

Ramberg was the first staff member Mirriam-Goldberg and singer Kelley Hunt hired when they founded “Brave Voice: Writing & Singing for Your Life,” a six-day retreat in the Flint Hills. For the past eight years, Ramberg has presented tai chi, gentle movement, yoga, jewelry making, sculpting and ceramics, mandala design and drawing.

“She regularly knocks the socks off fellow participants because of her writing, singing and songwriting, too,” Mirriam-Goldberg adds.

“Laura Ramberg is a true renaissance woman,” he says. “Her practice as an artist spans multiple disciplines from serious clowning to stone carving, although I’m not sure she has combined the two ... yet. She is a deep thinker with a light touch always open to collaboration and reinvention. Laura is a generous mentor and principled humanitarian whose art serves to enlighten us to the beauty and complexity of our neighborhood and world.”