'Feel the light': Much anticipated Turrell exhibition opens at Spencer Museum of Art 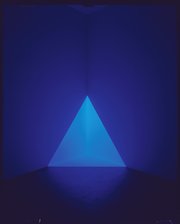 Artist James Turrell will be on hand for the public opening of “James Turrell: Gard Blue,” a new exhibition of his work at the Spencer Museum of Art.

Turrell is planning a conversation-style talk at 11 a.m. today in the auditorium at the museum, 1301 Mississippi St. Doors to the Central Court, where the exhibit is located, will open at noon. 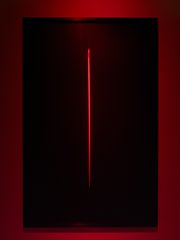 Light artist James Turrell at Roden Crater, an extinct volcanic cinder cone in Arizona that Turrell is transforming into a work of art. Copyright James Turrell. Photograph by Florian Holzherr.

Before Saturday night, light artist James Turrell had seen his work "Gard Blue" — a projection of blue light forming a singular glowing pyramid — just once since he created it in 1968. Back then, he said, he was young, pushing boundaries and creating the type of art no one had ever seen before.

In the 45 years since, Turrell has garnered worldwide fandom, but perhaps the most striking characteristic of “Gard Blue” is one he’s tried not to stray from in his work since: focus.

“I’m always reminded to stay clean and simple in the work and not get too involved in adding complications that don’t add anything,” the artist said, contemplating the work. “It’s nice to see it with a little more ease and grace.”

Turrell was at Kansas University’s Spencer Museum of Art during a private reception for “James Turrell: Gard Blue,” which opens to the public at noon today.

Turrell, 70, has been the talk of the art world this summer, and the Spencer’s exhibition comes on the heels of the hype. The Guggenheim museum in New York City, the Los Angeles County Museum of Art and the Museum of Fine Arts, Houston all are featuring major retrospectives of Turrell’s work. While he’s had exhibitions of that scale overseas, Turrell said, this summer has been the apex of his long career in the United States.

However, said Turrell, who lives on a ranch outside the small Arizona city of Flagstaff, he is happy to share his work in smaller communities and “less expected” places.

“This is not rock ‘n’ roll,” he said. “It does not get disseminated quite like music.”

Turrell’s art is the kind that’s worth seeing in person. Photographs aren't the same.

“I think that his work changes the viewer — if one is open to it,” Spencer Museum director Saralyn Reece Hardy said. “You don’t just see the light, you feel the light.”

The Spencer exhibition’s centerpiece is “Gard Blue,” installed inside a box-like room constructed in the middle of Central Court. A beam of blue light is projected against the wall with such precision that it appears to be a triangular object fitted into the corner, flush with the floor.

Surrounding “Gard Blue” are multicolored holograms that Turrell has created since 2000. In varying colors, framed geometric shapes appear to jump off or regress into the wall, morphing in dimension as the viewer moves.

The juxtaposition illustrates that while the artist’s work has evolved over decades, his pinpoint vision has not digressed. For Turrell, light is not just a medium to illuminate something else; light is the art itself.

The focal points of the work at the Spencer are perplexing — how’d he do that? — and mesmerizing. Colored light floats from the wall to envelop onlookers. The art is other-worldly and unsettling, yet beautiful and tranquil at the same time.

Turrell said he was inspired by the way we see light in dreams. He wants his work to make viewers feel as if they are a part of it.

For Lawrence native and KU alumnus Mark Booth, who owns “Gard Blue” with his wife Lauren, Turrell’s work is radical, ethereal and beautiful. The Booths own several of Turrell’s works, including some that are installed in their Connecticut home.

Mark Booth said he was thrilled to loan “Gard Blue” to the Spencer for the upcoming school year and especially honored to do so at the peak of Turrell’s career.

“It’s an opportunity for people to interact with somebody who really has changed art history,” Booth said. “And that doesn’t come around every day.”

Please go see the exhibit. Amazing. We are so lucky to have an exhibit like this in our community.