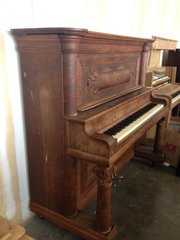 Lawrence native Arielle Bremby transformed this piano into a work of art for the upcoming "Play Me, I'm Yours" project in Boston, where she lives. 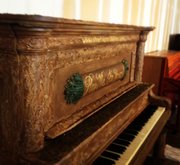 The resulting tree-inspired piano Lawrence native Arielle Bremby created for the "Play Me, I'm Yours" project in Boston, where she lives. 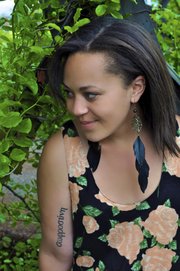 One of the 75 pianos-turned-works-of-art being unveiled this week for Boston’s “Play Me, I’m Yours” project was crafted by a Lawrence native.

Arielle Bremby’s inspiration, she says, was one of the things she misses most about home: trees.

“Moving to Boston, one of the adjustments was seeing a skyline instead of just seeing trees,” she says. “That’s just kind of my idea of home, being surrounded by trees and having leaves everywhere.”

The “Play Me, I’m Yours” project collects donations of old pianos then selects artists to decorate them. Once complete — and tuned up — the pianos are placed in public locations throughout the city, where anyone can sit down and play them anytime.

The Street Pianos Boston festival runs Friday through Oct. 14, with pianos in Boston, Cambridge, Somerville and Brookline, the suburb where Bremby currently lives.

After graduating from Free State High School in 2008, Bremby moved to Boston to study painting and art history at Boston University. She now works in admissions at the Art Institute of Boston. After submitting samples of her work, she was surprised to learn in early August she’d been chosen to decorate a piano.

Bremby perused photos of the ones artists had to choose from and got her first pick — a massive, rich brown upright with ornate Corinthian columns supporting the keyboard and a carved scroll above the music rack.

“I could just see a lot of possibilities,” she says. “It was just ready for my ideas.”

Bremby covered the wood with three-dimensional tree bark — forming texture with plaster of Paris and a palette knife, then painting it variegated shades of brown. She added live moss from her neighborhood that she hopes will continue to grow, and finished the music rack with green leaves and golden script that says, “Play Me, I’m Yours!”

“I just kind of wanted to build a tree and watch it get placed somewhere in the city,” Bremby says.

“Play Me, I’m Yours” was first commissioned in 2008 in the U.K. and has since reached an estimated 5 million people worldwide, according to streetpianos.com. British artist Luke Jerram is credited with creating “Play Me, I’m Yours,” inspired by visits to his local launderette.

“I saw the same people there each weekend and yet no one talked to one another,” Jerram says in a statement on the project’s website. “I suddenly realized that within a city, there must be hundreds of these invisible communities, regularly spending time with one another in silence. Placing a piano into the space was my solution to this problem, acting as a catalyst for conversation and changing the dynamics of a space.”

Last week, Bremby wasn’t yet sure where in the city her piano would be placed.

Wherever they go — in addition to the donors, the artists, the tuners and the organizers — each piano is supposed to have a nearby business or organization designated to keep an eye on it. And then, who knows who might sit down to play?

“It’s a really big community effort,” Bremby says. “There’s so many possibilities in a city like Boston.”