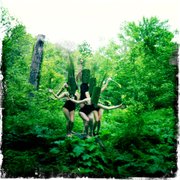 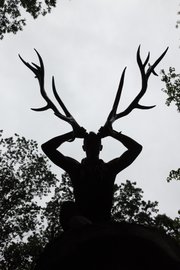 Armitage Gone! Dance will present "Fables on Global Warming" Saturday, Sept. 28, 2013, at the Lied Center. The production casts dancers as animals such as the Stag, costume by Doug Fitch. 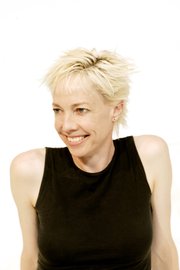 Armitage Gone! Dance presents “Fables on Global Warming” at 7:30 p.m. Saturday at the Lied Center, 1600 Stewart Drive. Tickets start at $21 for adults or $11 for students and youth and may be purchased online at lied.ku.edu or by calling 864-2787.

A free meet-and-greet with the dance troupe is planned in the Lied Center Pavilion following the performance.

Karole Armitage — a classically trained ballerina whose first job was dancing with a company devoted to the repertory of George Balanchine — does consider her contemporary choreography to be ballet.

But Armitage wasn’t dubbed the “punk ballerina” for nothing.

Instead of confining them to the classical mold, Armitage aims for her dancers’ movements to reflect global developments since the 19th century.

“It is very much ballet thinking,” she says, “but it looks different because the world has changed.”

That sentiment will be in the spotlight Saturday evening, when Armitage’s company, Armitage Gone! Dance, performs “Fables on Global Warming” at the Lied Center.

Armitage, who grew up in Lawrence, founded her first dance company in 1979. Ever wary of the world around her, she says “Fables” is actually her first work that specifically addresses a social issue.

Although, Armitage notes, “it’s more of a philosophical engagement rather than a political or social one.”

Armitage isn’t trying to “lecture” people, and she’s not going for “doom and gloom,” she says. Rather, she simply hopes to make people think.

In “Fables,” her messengers of choice are a troubadour band of extinct North American animals, including creatures like the Carolina parakeet and the big thicket hog-nosed skunk. Through dance, singing, flute and trombone playing, props and puppets, the animals tell the stories of ancient fables from throughout the world.

“It is about how to use power wisely,” Armitage says. “And they all have beautiful metaphors for climate change or understanding the environment.”

The show — being performed for only the second time — is designed to appeal to all ages and all levels of experience of watching dance. Armitage says audiences can expect a hybrid of performance art and choreography “pushing the boundaries of the most technical virtuoso of dance.”

Science has inspired some of Armitage’s past work, including “Three Theories,” which her company performed at its last Lawrence appearance in 2010. Her father was a science professor at Kansas University, and his doctorate in ecology, in particular, influenced Armitage’s creation of “Fables.”

After moving to Lawrence as a young child, Armitage started ballet classes under the tutelage of a former New York City Ballet dancer who brought Balanchine’s “excitement and glamor and true craft” to this part of the country, she says.

As she advanced, Armitage commuted to ballet class in Kansas City and traveled to New York and other cities for summer intensives. She attended North Carolina School of the Arts in lieu of a traditional high school.

After a year at the University of Utah, Armitage got an offer to dance with the Ballet du Grand Théâtre de Genève in Switzerland, where she performed Balanchine choreography for two years before embarking on her first modern dance job — with Merce Cunningham’s company.

Her signature choreography is a mash-up with roots in both.

Armitage says the thinking behind it comes from classical ballet — “What we’re doing is writing on air with our body,” she explains. But instead of mimicking shapes of angular Euclidean geometry, hers are inspired by fractal geometry, the organic curves of clouds and mountains and seashores.

“It’s using the same tools,” she says, “but thinking about those tools in different ways.”