Before he became a master puppeteer, Joseph Cashore could handle a basketball like few others

Sports heroes entered my life early from my seat on the floor of our crowded den in Rochester, N.Y., where with my father and five brothers I watched Roberto Clemente, Wilt Chamberlain and Arnold Palmer performing on television.

My idols weren’t all household names, didn’t all appear on national TV. I watched one from a second-story window of our house. I was probably 10 when my oldest brother, John, 10 years my senior, had brought a friend home from Notre Dame during a break in the academic calendar.

Of the hundreds who played basketball on our driveway, nobody ever dribbled a basketball with such a wide array of tricks, each series of moves punctuated by a sweet jumper, as John’s college friend.

I summoned the courage to join him in shooting hoops, and from that point forward never stopped trying to mimic his game. Nice guy, this basketball magician who seemed to have the ball on a string, moving it so precisely where he wanted it to go with such blinding quickness.

I never saw him again, but forgot neither his name, kind spirit nor the basketball show he gave without knowing he had an audience. 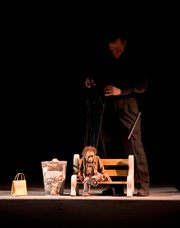 Puppeteer Joseph Cashore performs with his marionette of a homeless man sitting on a bench, and is so detailed he can make its toes wiggle through its shoes.

Joseph Cashore and the Cashore Marionettes will be performing four shows over two days at the Lied Center. “Simple Gifts” will 5 p.m. Friday and 2 p.m. Saturday, for ages 8 and older. “Life in Motion” will be 7:30 p.m. Friday and Saturday for ages 12 and older. Tickets cost $21 for adults and $10 for students and youths and are available for purchase at the Lied Center box office and lied.ku.edu. 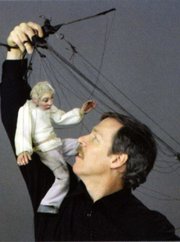 Joseph Cashore with one of his marionettes.

A virtuoso violinist is one of the 15 marionettes used by Joseph Cashore in his performances. The Cashore Marionettes will be performing in four shows this week at the Lied Center.

That explains the goose bumps when I caught a glimpse of a poster at the Lied Center, where I had gone several weeks ago to watch a screening of “Jayhawkers.” It promoted an upcoming event: The Cashore Marionettes.

Ball-handling wizard, marionettes, last name Cashore. Too big a coincidence that two men with a fairly uncommon name would be blessed with exceptional dexterity without at least being related.

I went to cashoremarionettes.com and read the identity of the puppeteer, Joseph Cashore, graduate of Notre Dame. A picture from his boyhood and one from today confirmed that 45 years later, I would be afforded the privilege of watching my late brother John’s friend perform again, this time with instruments far more complex and moving than a basketball.

A critically acclaimed craftsman and puppet master who has performed not just across the country but in Europe and Asia as well, Cashore is giving four performances at Lied Center this weekend. “Simple Gifts” is at 5 p.m. Friday and 2 p.m. Saturday; “Life in Motion” is scheduled for Friday and Saturday at 7:30 p.m. each night. The emotion-tugging, universal themes of his shows are aimed more at an adult audience, particularly “Life in Motion,” but neither is inappropriate for children, say those who have seen them.

Cashore was told by a Lied Center official to expect a phone call from a reporter in Lawrence. I reached him and asked questions he is accustomed to answering. Then, out of nowhere, I said, “With the dexterity needed to construct such detailed dolls and make them move the way you do, you must have been an incredible ball-handler when you played basketball.”

“What makes you say that?” he said with a blend of shock and enthusiasm.

That’s when I confessed that we had met some 45 years earlier. We shared how fond we were of my brother, who was taken by cancer the day after Christmas in 2006, and I returned to inquiring about Joe’s lifelong work.

He said he made his first puppet at age 11, using clothespins, a string and a tin can.

“I just made one for fun and it really wasn’t very good,” said Cashore, who lives in Pennsylvania with his wife, Wilma, the business mind of Cashore Marionettes. “But once in a while, when it moved just right, it looked like it was alive to me.”

He didn’t make another until after he graduated from Notre Dame in 1971, the same year Fighting Irish guard Austin Carr was the first overall pick in the NBA draft. Cashore didn’t play for the basketball team at Notre Dame; rather, he pursued his dream to become a painter before rekindling his fascination with marionettes.

“As I got older, I started playing with that idea of the sensation of (the dolls) being alive and with ways to make them move better,” he said. “Every time I made one, I had an idea for another, and it kind of snowballed.”

He said he has created 150 marionettes, and the 15 he uses in his shows are the ones he considers to be his best. They include:

• A virtuoso violinist with wild white hair, wearing a tuxedo, moving the bow in cadence with the classical music playing

• A young mother trying to calm her restless infant

• A widow visiting her husband’s grave

Music from classical composers accompanies the poetry in motion. The shows consist of a series of stories told by the movements of the marionettes.

Cashore is sole creator of the dolls. He sculpts their faces, paints them, selects their clothes and designs the technical components to make them move just so. After building them, he tests their movements with wire, learns the right control spots. He replaces the wire with fishing line and rehearses the moves until they become “muscle memory.” The dolls can have as many as 44 strings that he controls with nothing but his two hands.

For parts of nine months of the year, he and Wilma drive to shows throughout the United States and Canada. Flying puts the marionettes, which can take as long as a year to perfect and travel in custom-made trunks, at too great a risk, given the haphazard nature of baggage inspections.

Cashore not only makes the dolls, but writes each scene — all original material based on his observations of life’s simple moments, some touching, others humorous — designs and lights the sets, choreographs the moves and selects the music. It requires a feel for just about all of the theatrical and fine arts.

Paul Scott, longtime family friend since he met my brother in high school, roomed with Cashore at Notre Dame and has seen him perform four times.

“I’ve taken people to it and they were like, ‘Why are you taking me to a puppet show?’ Then they’re like, ‘Oh my God, that was really something.’ If you want to see something like nothing else you’ve ever seen, this is it. Everybody who sees it says it’s not what they expected.”

The marionettes are so fluid, Scott said, the strings and his friend fade into oblivion and the audience becomes captivated by the simple, moving stories Scott called, “simple slices of life.”

“You’ll look over and see someone wiping tears from their eyes, or you’ll hear someone sniffing,” Scott said. “You’ll hear, ‘Oh my God!’ People are just mesmerized by it.”

Scott said the first time he saw his old friend’s show he was fascinated by the technical aspects of the performance and then became, “swept up in the emotion of the characters.”

I’ll be attending Friday night’s show and won’t be surprised if the marionettes play tricks on my mind. I was happy to receive confirmation from Scott that my memory was not playing tricks on me.

“(Cashore) was a very, very talented portrait artist,” Scott said. “And he was a great basketball player.”

My brother John was far from that, sixth best of six brothers, none of whom made it to the Hall of Fame.

It wasn’t basketball that bonded the friends. The more I researched Cashore’s work, the more it became evident that his extraordinary hands rank a distant second to his greatest tool, an amazing mind, one cloaked in humility. No wonder he was such good friends in college with the smartest guy I ever knew.