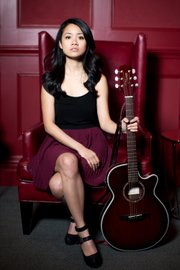 If you didn’t already know Nirvana’s “Heart-Shaped Box,” this Hawaiian-born artist by the name of Kawehi introduced the angsty grunge song to Vimeo in March with her signature looping style, synth effects, mini-keyboard, singing, beatboxing, and about half a bottle of wine.

If you frequent this ol’ thing called the Internet, you've probably stumbled across the virality of Lawrence’s own one-woman band under the name of Kawehi, who has just within the last month managed to get the attention of publications like Esquire, Elle, The Huffington Post and Spin — not to mention even more websites — with the video release of a casual practice-run of a song cover.

In fact, if you didn’t already know Nirvana’s “Heart-Shaped Box,” this Hawaiian-born artist, whose full name is Kawehi Wight, introduced the angsty grunge song (“uncoverable,” according to Esquire’s Ned Hepburn) to Vimeo in March with her signature looping style, synth effects, mini-keyboard, singing, beatboxing, and about half a bottle of wine.

Quickly after that, her video was selected as a "Staff Pick" on Vimeo, the Kickstarter project for her third EP (currently in the works) was funded more than 900 percent, and magazine features were praising her as “killer,” “unbelievable,” and from Courtney Love via Twitter, “genius.” Her Facebook fan base increased by thousands. Kawehi’s handling all of the attention with grace and humility.

“I'm still in shock, but am so grateful to everyone,” Kawehi says. “I mean, I've been reading all of these magazines for ages and can't believe I'm a part of them. Whoa.”

Fresh out of high school in Hawaii, she auditioned for a band and moved out to Los Angeles after getting the job. Kawehi moved to Eudora last June after parting ways with the band, learning that it wasn’t the lifestyle or type of music career she had in mind. She is currently renting an apartment in Lawrence with her husband, while the Black Lodge recording studio is being renovated. Having started as a musician performing acoustic sets, she grew tired of the monotony, especially after seeing so many talented musicians on an East Coast tour.

“I felt like I hit a plateau — musically, creatively — and I've always wanted to pick up looping, but was terrified of it,” she says. “I thought, ‘What better time than now?’ and it all kind of went from there.”

The idea to cover “Heart-Shaped Box” wasn’t even her doing, although Nirvana is one of her favorite bands. It’s part of a Kickstarter cover series for her forthcoming EP “Robot Heart,” on which she will record covers requested by backers, as well as original songs. “Lots of videos,” too, which means we’ll get to see first-hand her inventive looping takes on some of our favorite songs.

“‘Robot Heart’ will be on the electronic side [with] a little bit of pop into the mix, and I love adding vocals as a pad or beatboxing,” Kawehi says. “It gives it a little bit of an organic feel to it.”

With the sudden fame and massive onslaught of emails offering up new management opportunities, it would be easy for her to get caught up in the wave and make some major moves, career-wise and geographically. But don’t worry, Lawrence — she says she won’t leave us.

“I love it here,” she says. “It's beautiful, quiet, calm. I love the wide-open space.

"Things have changed quite a bit, but I'm still in an indie mindset,” she says. “I don't think that'll ever change for me. I mean I already have a great and loyal fan base who watch all of my videos, but now that fan base is 20 times larger and I really, truly didn't expect that. Ever.”

But she’s not looking a gift horse in the mouth. Hard at work on “Robot Heart,” she’s looking at touring in different countries (“first stop is Sweden!”) and promoting the EP across the country. Expect local shows as soon as May.

Until then, her fans and those curious about her music can catch her videos online and revel in the fact that she chooses the oasis of Kansas as her home base for musical creation.

“I think the major thing that living here has provided me with is the ability to create freely, with no worries; nothing else getting in the way of my craft,” Kawehi says. “That's a huge deal for me. I've never had that before, ever. For that alone, I'll forever be grateful to Kansas.”

Woohoo! Great job Nadia! (Bonus that I adore the subject matter!) I'm totally going to a show when she plays! :)