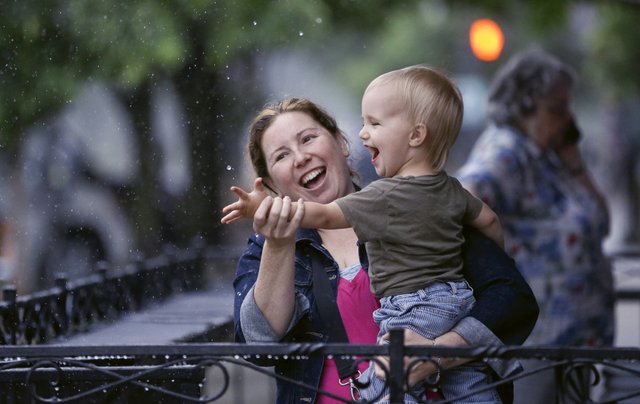 Ami Bruce laughs as she holds out Cambell Harding's hand to catch rain drops while underneath a canopy outside Papa Keno's, 1035 Massachusetts, in May 2013. Nick Krug's photo of Bruce and Cambell recently won first place in the Local Media Association's feature photo category for newspapers with a circulation below 30,000 per day.

The Lawrence Journal-World was among the top overall newspaper winners in the Local Media Association’s 2013 Editorial Contest, the association announced Tuesday.

The Journal-World won 12 awards across eight categories among daily newspapers with circulation below 30,000 per day, including first place for news and feature photography, both by staff photographer Nick Krug.

“I’m proud of our staff every day, but it’s always especially gratifying when our industry peers take a look at what we’re doing and judge it to be among the best work out there,” said Julie Wright, managing editor of the Journal-World. “We have an exceptional team, and the LMA awards just validate that.”

The Local Media Association is a nonprofit, professional trade association representing suburban and community newspapers. The association’s membership is comprised of more than 2,000 newspapers in the United States and Canada.