The role of being onstage as a musician is more than belting out a song you penned for the latest album release. It’s about finding the true character of the song, says John Cale, which will likely take form in a different manner each time it is performed. 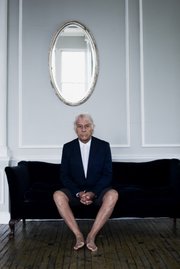 John Cale is this month’s featured Nine Forty Live artist at Lawrence Arts Center (940 New Hampshire St.), performing a variety of material from his six decades of studio albums with a backing band on April 15 at 8 p.m. Tickets are $40. Drakkar Sauna will be opening up the night.

Influential Welsh violist, composer, pianist and vocalist Cale knows a thing or two about putting on a show. Beginning his music training in contemporary classical music at University of London in the early 1960s, and then invited by Aaron Copland to study at Tanglewood in 1963, he flipped the switch radically on his last day of classes in London with experimental performances in honor of free-spirited minimalist La Monte Young.

He left with the “Most Hateful Student” award from administration, after playing a Young piano piece with his elbows, and an original performance piece of screaming at a potted plant until it dies. It’s safe to say, the artist is determined to entertain.

Currently in the studio working on radio remixes that explore experimentalism in another vain — his recent collaborations with electronic artists including Actress, Maria Minerva, Tim Hecker — the co-founder of Velvet Underground is about to embark on another tour that includes a stop in Lawrence.

Cale is this month’s featured Nine Forty Live artist at 8 p.m April 15 at the Lawrence Arts Center, and he will perform a variety of material from his six decades of studio albums (his latest, “Shifty Adventures In Nookie Wood”) with a backing band.

“We’re sort of told to do a really mean and lean set,” Cale says. “But in general I think it’s the character that comes through. It’s not going to be technology all over.”

In true Cale fashion, there’s going to be some surprises in the mix to look forward to (which he wouldn't disclose), but anyone familiar with his live shows already knows not to come prepared to hear exact renditions they’ve heard in the past.

He just wants to hit the spot for the crowd every time, and, he says, he does it to escape boredom. In a 90-minute set, a good musician will take note of the aspects of the show that resonate best with the audience, Cale says, and then try different takes to figure out why that is.

“Or maybe the way in which you sing it. Maybe you sing it in a sarcastic way one day. So there are all sorts of ways of doing it. It’s just a little bit of method acting.”

If a song is of the comedic nature, that nature cannot be rehearsed.

“I think some days it takes a little bit of time to get that in your head how to do it,” he says. “We do a really strange version of ‘Fear is a Man’s Best Friend.’ It’s very easy to overplay that song because it’s dependent on a sense of humor. And that’s not something you can really define that will work every time. There’s a spontaneity on stage that really gets you the humor.”

While his background isn’t in singing and he says he never thought of himself as much of vocalist in the past (bassist, violist and keyboardist in Velvet), a large part of his solo career based on innovative compositions has been supported by the unique timbre of his voice. His cover of Leonard Cohen’s “Hallelujah” (featured in the movie “Shrek”) is as much about the quicker tempo he took changing the way artists continue to cover Cohen’s song, as Cale’s strong, moving vocals.

“I thought I was really much stronger as an instrumentalist but slowly I have learned how to use my voice a little better,” Cale says. “[There’s] a lot of things that the voice can do, especially making noises, using foreign language and foreign accents to make them work for you. You never really know what’s going to get you going.”

Producing new tracks every day, he says, he’s lucky to have his own little studio space where he can draw inspiration from anger and, once again, boredom. These are his most powerful tools for creation.

“And it’s very exciting to come up with something unorthodox,” he says.