Family Adventures: May flowers for everyone

The neighborhood I grew up in wasn’t terribly friendly. Everyone waived “hi” over the fences at each other, but there were no block parties or potlucks. It was very each-to-his-own.

Our immediate next door neighbor was an older woman who lived alone and kept about a dozen cats at all times. When I could coax a kitten under the fence, I was allowed to play with it, but for the most part I was under strict orders to leave the woman in peace.

Except that one May Day, I didn’t. In school that day, we had made “May baskets” — little paper cones with a string attached to hang over a doorknob. My teacher had also taught us about the custom of filling the basket with flowers, leaving it on someone’s porch, knocking, and then running away before they answered.

I thought that idea sounded fun, so — unbeknownst to my mother — I filled my little cone with dandelions, quietly crept up to the woman’s front door, rapped on it hard, and ran as quickly as I could to hide in some nearby bushes and watch. The woman looked puzzled as she opened the door, until she saw the flowers. 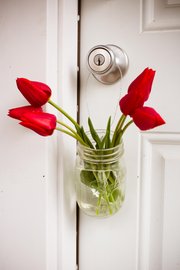 Meryl Carver-Allmond/Special to the Journal-World

With tulips and daffodils in bloom right now, it’s the perfect time to make and hand out May baskets.

Then, much to my misunderstood horror, she began to sob.

I was so afraid. Not only had I “bothered” the poor woman, I had made her cry! Worried that I would get into deep trouble, I waited until she went back inside and slunk home.

Of course, as a grown-up, I understand her reaction a bit differently. And — although it won’t officially be May Day for a couple of weeks yet — with all the tulips and daffodils in bloom right now, I think I may load up the Kid on Easter Sunday and teach him how to properly deliver May baskets.

While a paper cone will certainly do, these days I like to make my baskets so that they will hold water to keep the flowers fresh. A canning jar and a length of wire makes a basket that’s pretty, inexpensive and functional.

If you don’t have those supplies lying around, you can get both wire and jars at Cottin’s Hardware, 1832 Massachusetts St. Wire that’s about 18 gauge should do the trick, but feel free to use what you have on hand.

To make the basket, start with a piece of wire that’s about 6 feet long, and put the jar in the center. Wrap the wire tightly around the jar as if you were going to tie a bow, but instead just make a twist or two. Wrap the jar like this 2-3 more times to secure the wire, then start making the loop for the handle.

To make the loop stronger, take the two ends of wire that are sticking off the jar, and begin twisting them to make a handle that’s double thickness. Keep twisting until you have about 1 foot of twisted wire, then snip off the remaining ends.

Form the twisted wire into a loop, and wrap the disconnected end around the end that’s connected to the jar several times. Use a pair of pliers to really bash down the end of the wire so that it isn’t pokey.

Lastly, fill the jars with water and flowers and go knocking. I’m confident you’ll leave many with friends and people you know well, but — just for fun — try to drop off a few with neighbors that you don’t know as well, too.

— Meryl Carver-Allmond lives in Lawrence and writes about chickens, babies, knitting, gardening, food, photography, and whatever else tickles her fancy on any given day at www.mybitofearth.net.