Behind the Lens: A picture can be worth more than words

Did you know that the difference between apologizing to your spouse and owning a photograph of Fats Domino is $189?

Several weeks ago I made the impulsive decision to place a silent bid on a photograph in the Lawrence Arts Center’s Benefit Art Auction. No one had yet to bid on the photo, and I wanted to help kick things off. Besides, I liked the image. I mean who wouldn’t enjoy the thrill of owning a photograph of the King of Blueberry Hill combing his hair before a performance? Well, possibly my wife. But I didn’t tell her.

As the days went by, my bid remained alone at the top of the sheet. I assured myself that although I hadn’t really budgeted for a photograph of Mr. Domino, in my mind it was worth my bid of $311. The photograph, by former Rolling Stone magazine photographer Baron Wolman, had a retail value of $600. If I got it at my bid, I could explain to my wife that I had saved us money while acquiring a photograph of great value. 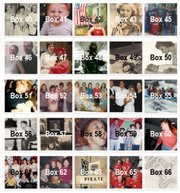 This screen shot from the National Disaster Photo Rescue website, displays folders of photographs recovered from southwest Missouri after a 2011 tornado struck Joplin, Mo. The project collects found photographs, digitizes them and posts them on their website so the can be reunited with families who lost them. As reporter by PBS Newshour reporter Colleen Shalby, "when little of a persons pre-tragedy life survives, a picture is truly worth a thousand words of gratitude."

In 2011, $4.3 million was paid for an Andreas Gursky photo, the highest price ever spent for a photograph. The value of that photograph is based largely on its significance as an example of a new movement in photography.

The seventh-most-expensive photograph is an 1880 tintype portrait of Billy the Kid that sold for $2.3 million. Its value is based on its significance as a one-of-a-kind historical document.

Many of us might embrace another value: the photograph as memory.

In a 2012 TED lecture, Becci Manson, a New York-area photo retoucher, said photos are “our memory-keepers and our histories, the last thing we would grab and the first thing you’d go back to look for.”

In response to the 2011 tsunami in Japan, Manson initiated a project to restore photographs damaged in the disaster and return them to people who had lost them. Recognizing the healing value of photography, photographer Brian Peterson, who lived in Japan at the time of the tsunami, began helping families rebuild their photo albums.

Peterson and other photographers started doing monthly photo sessions with families who had lost photographs in the tsunami. The portraits provided fresh images to start new photo albums. Closer to Lawrence, the Carthage First Baptist Church organized the National Disaster Photo Rescue project after a tornado struck Joplin, Mo., in 2011.

The goal of this group is to reunite Joplin residents with storm-tossed photos recovered from the area.

Found photographs are digitized and posted on the groups website in hopes of reconnecting the pictures with their owners. In writing about the project, “PBS NewsHour” reporter Colleen Shalby wrote, “when little of a persons’ pre-tragedy life survives, a picture is truly worth a thousand words of gratitude.”

The photograph of Fats was sold for $189 more than my bid, and possibly, I lost out on owning a rock ‘n’ roll photo of some value. That’s OK. Maybe I’ll print and frame an old family photograph instead. Either way I won’t have to apologize to my wife for an impulsive purchase. And that is invaluable.

— Check out more photos at ljworld.tumblr.com.