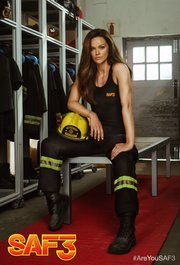 Since she was an adolescent at South Junior High School, Lydia Hull had been dreaming of a career in acting. Now, the Lawrence native has just experienced her first big break.

Hull recently completed shooting her first season on “Saf3,” a syndicated TV series that follows an elite, multi-agency rescue task force in Southern California as they face disaster. Hull plays Lily Maddox, an L.A. firefighter whose father, also a firefighter, died when she was a young girl.

“She’s a tough character,” Hull said. “But she’s also very compassionate and cares a lot about her teammates. It’s kind of fun to get to play that duality.”

Hull, now 32, began her career as a model at age 15, when she was still enrolled in Lawrence High School. That year, she beat out more than 35,000 other applicants in the Seventeen Magazine/J.C. Penney Cover Model Contest and landed the cover of the November 1997 issue of Seventeen Magazine. She graduated early from LHS and worked as a model in destinations like Miami, New York and Paris.

During her three years in Los Angeles, Hull landed small parts in several movies, including “Sorority Boys” and “Van Wilder: Party Liaison.” After that, she moved back to Kansas and attended Kansas State University, graduating with a degree in apparel and textile marketing in 2006.

Upon graduating, Hull moved back to L.A., where she currently lives, and received a degree in jewelry design from the Fashion Institute of Design and Merchandising.

“The practical side of me wanted to have something else other than investing all of my hopes and dreams into a career where sometimes you have very little control over the outcome,” she said.

But so far in her acting career, Hull said, she’s been “lucky.”

She never took her hand out of the acting game, even when going to school. She met the creators of “Saf3” before the idea for the show came to fruition, and, after an audition, she landed the part of Lily.

Hull recently spent five months in Cape Town, South Africa on the set of “Saf3.” She is hoping for a second season to be announced soon.

“I really just want to keep working and improving my skills and seeing what other types of characters I can portray,” Hull said. “It’s such a cool job to be a storyteller, and I just want to keep getting better. As far as ‘Saf3,’ I hope it has a bright future and it’s ongoing. If not, I hope I can find something else to be a part of.”

“Saf3,” which was created by those behind “Baywatch,” airs on Saturdays at 1 p.m. on Fox. The first 20-episode season premiered in September and ends May 12.

Editor's Note: Lydia Hull is the daughter of Bert Hull, general manager of Sunflower Publishing, a subsidiary of The World Company, which also owns the Journal-World.