Getting inked: The bodies of artwork in Lawrence 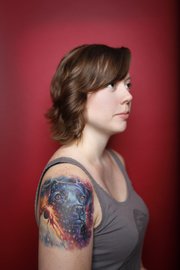 Havana Mahoney has a shoulder tattoo portraying her dog within the galaxy. She decided on the tattoo because the artist specializes in space scenes and portraits.

Lawrence resident Kristin Spacek says the inspiration behind her sleeve of flowers is her profession as owner of Owens Flower Shop, 846 Indiana St. 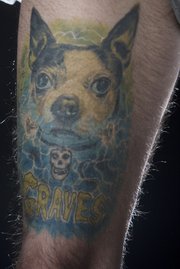 Terry Taylor's dog Graves is tattooed on his leg with the ashes in the ink. 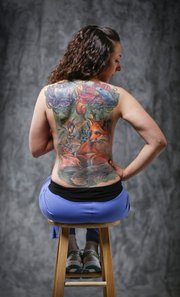 Katie Bledsoe's back features a natural scene to cover up three older tattoos that she no longer wanted. The full tattoo took 36 hours over several sessions to complete. 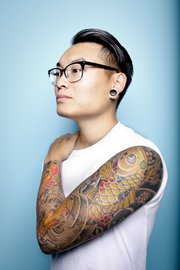 Travis Young has a full sleeve on his left arm which is composed of traditional Japanese art, including koi fish, cherry blossoms and waves.

Tattoos can be more than just ink on skin: They're works of art painted on a living canvas.

Carlos Ransom, owner of Abraxas Tattoo Company, has set up his studio to be fit for an artist. None of his sessions are less than three hours, requiring blocks of his day to be set aside for large-scale and sometimes photorealistic pieces.

“These take a lot longer than traditional tattoos where it’s just an outline and shading,” Ransom says. “It’s approached like a painting.”

Ransom will ink a tattoo section-by-section over the course of several sessions, adding his own flair as he goes along until the masterpiece is finished.

Every tattoo has a story. Here are the stories behind some of the most colorful and interesting tattoos in Lawrence and the people who got them.

Havana Mahoney, 24, knew she wanted a portrait of her dog Franky on her shoulder, but was looking for an artful and unique way to frame it. By following Ransom on Instagram, she immediately connected to an idea.

“One day Carlos posted this pet portrait in a galaxy style of this woman’s cat, and it was the most beautiful thing I’d ever seen,” Mahoney says. “I was like, that’s it.”

Tattoos are known to have an addictive effect on people. When asked if it was her only tattoo, Mahoney quickly clarified that it was her first.

“This is something that can easily be turned into a sleeve,” she says.

As owner of Owens Flower Shop, Kristin Spacek, 32, is a walking advertisement for her shop, with a series of flowers making up her sleeve tattoo.

It started with a black-eyed Susan. Soon her arm bloomed with other favorites — a lily, anemone, ranunculus, and a coneflower — over several sessions.

“I just wanted a little flower, and later thought why not build upon what I’ve got,” she says. “I think tattoos can be very beautiful,” she says. “It’s art that’s with me wherever I go.”

Terry Taylor, 41, took a pet portrait one step further and had the ashes of his deceased dog Graves put into the ink used to make a tattoo of the dog's likeness.

Graves toured all over North America with Taylor as he played in various bands (currently in Hammerlord) until she passed from brain tumor last year.

“She was my best buddy,” he says. “I brought her everywhere.”

Graves is on Taylor’s upper thigh with Frankenstein neck bolts; she had scars on her belly from multiple surgeries as she battled breast cancer, she earned that nickname. Because ash and ink are both carbon-based, it was sanitary and feasible to make the ultimate tribute.

A change of heart with tattoos doesn’t have to be the end of the world. Where a giant nature scene with two foxes takes over Katie Bledsoe’s back, there used to be a fairy on each shoulder blade and a dragon on her lower back.

“I was in high school when I started getting tattoos and I wish someone told me to wait and don’t pick flash art off the wall,” she says laughing.

Bledsoe, 32, walked into Abraxas and left her new ink in the hands of artist Chris Hess. She didn’t know what would appear on her back until after each session.

“He’s the professional,” she says. “He’s going to know what covers the best.”

After his five-year relationship ended, Travis Young, 24, decided to get a sleeve tattoo as a pick-me-up. He had been sitting on the idea for a while.

As a local photographer, he already had aperture blades of a camera lens inked on his forearm. Young was attracted to the metaphors of traditional Japanese art. He went to Martin Del Camino, of Ichiban Tattoo Studio, to incorporate the new tattoos with blades.

On his arm, one koi fish is fighting with water and the other is fighting against it, symbolic for life’s unpredictable waves among smooth sailing. Cherry blossoms, which grow under harsh conditions and don’t last long, are scattered throughout.

“It’s this idea that life can be beautiful but the slightest breeze can take you out,” he says.

Overall the tattoo reminds him of his determination to make some waves in his career beyond fame.

“In my representation around this aperture blade, I want to do something more as a photographer,” he says. “I want drive conversation.”

Total hours: “I stopped counting after 24 hours and he was three quarters of the way done.”