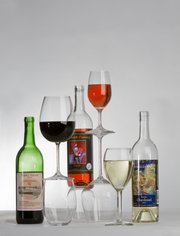 To see a list of more Kansas wineries — including several in Leavenworth, Miami and Johnson counties — click here.

Mark and Pam Thomeczek of Marshall, Mo., sample wine in the tasting room at BlueJacket Crossing Vineyard and Winery outside Eudora. BlueJacket Crossing, a designated Kansas agritourism site, sells more wine by being able to offer a farm experience to go with it, owner Pep Selvan-Solberg says.

Pep Solberg lifts up the canopy on some vines to reveal clusters of grapes at Bluejacket Crossing Winery and Vineyard, located about four miles southwest of Eudora.

Greg Shipe takes Tim and Sarah Jackson, of Lawrence, on a ride through the vineyard Saturday at Davenport Winery in Eudora during the Kaw Valley Farm Tour.

Volunteers took to the long rows of Fredonia grapes at Davenport winery Saturday. Winery co-owner Greg Shipe said it takes 17 pounds of grapes to make one bottle of wine.

“Get the California out of your mind,” said Lori Henderson, who along with her husband owns the newly opened Crooked Post Winery in Ozawkie. “Put all preconceived notions out of your head about what wines are supposed to taste like.”

Crooked Post is one newcomer in the growing Kansas wine industry, which now counts more than 30 wineries, according to the Kansas Department of Agriculture’s Kansas Grape and Wine Industry Advisory Council.

Henderson and other Kansas winemakers who grow their own grapes are adamant about embracing our state’s unique terroir — the growing conditions that give wine from different regions distinct tastes. Wines made from Kansas grapes won’t taste like the ones most people are used to, and that’s not a bad thing, connoisseurs say.

With that settled, here are some more tips for what to expect when tasting Kansas wine, where to buy it and more.

“If you want a Kansas wine, it should be a Kansas wine,” said Steve Wilson, owner of Lawrence’s City Wine Market, 4821 W. Sixth St.

Some Kansas wineries bottle juice from grapes grown out of state, or even out of the region.

To be classified as a farm winery in Kansas, wineries need only use 30 percent Kansas-grown ingredients in their products. The provision doesn’t apply to individual bottles, but rather a winery’s overall products — for example, a winery that produced one type of wine with 100 percent Kansas grapes and two types with none would comply with the law.

So look for labels that say Kansas wine — meaning at least 75 percent of that bottle’s contents are grown in-state, per federal labeling requirements — or buy from wineries that will tell you where their grapes are grown.

Most likely, that Kansas wine you find will be made from a less widely known grape varietal, Wilson said.

The European grapes most people are familiar with — think merlot and chardonnay — originated in more Mediterranean-type climates, he said. “Our climate, which swings wildly between hot and cold, requires a grape that’s more suited to that.”

The American grape varietals used to make most Kansas wines have a distinct profile, with a certain “foxiness” — often described as a wild, musky yet grapey note — being their signature, Wilson said.

Liquor stores have a limited selection of Kansas wines, most of which sell for about $12 to $18 a bottle.

But one plus for Kansas wines is that they’re grown and made right here, from just outside Lawrence to a couple hour’s drive away. So visiting, tasting and — often— talking to the grower and winemaker himself is easy.

The tri-county area around Lawrence is home to about a half dozen wineries, most of which have tasting rooms open to the public.

All those acres result in some 40 wines, with about 15 to 20 available at any given time, Shipe said.

“The best thing is just to try them,” he said. “You can taste and take home what you like.”

Even Wilson, whose store carries some Kansas wines, said it’s better for customers to visit wineries in person.

“I want people to see the grapes growing in the field next to that tasting room. I want them to be able to talk to the person who is a farmer who can tell them exactly what is involved in making that wine,” Wilson said. “If it’s good, it has a story to tell. And it’s usually a story about a place and people.”