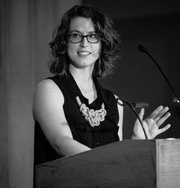 A woman currently serving as a public art coordinator for Denver has been hired as Lawrence’s first arts and culture director, the city announced today.

Christina McClelland is scheduled to begin her new job here on Sept. 29.

“The city is fortunate to have Christina take on this new role,” Lawrence City Manager David Corliss said in a news release. “Her strong background in public art administration and work in university communities will be particularly helpful in this newly created position.”

McClelland said she was thrilled to join the city of Lawrence.

"I’m very impressed by the arts scene in Lawrence and have found it has a reputation nationwide," she said. "When I mention Lawrence, no matter where I am, people know it for its rich arts and cultural scene. I look forward to getting to know all of the fantastic artists and arts organization in the community and building on this strong foundation as the city’s first Director of Arts and Culture."

The new position will focus on coordinating arts and culture activities in Lawrence, Corliss said. McClelland’s first tasks will include coordinating the creation of a citywide cultural plan, the city’s role in a recently announced ArtPlace grant, Final Fridays activities and Lawrence Cultural Arts Commission programs. She also will serve as the city’s staff liaison for the Arts Commission and the Sister Cities Advisory Board.

A recently awarded grant from the Kansas Creative Arts Industries Commission will fund $25,000 of the position’s first-year salary.

Lawrence received about 100 applications for the job before narrowing the field to three finalists, who spoke with members of the public during a meet-and-greet event in July.

The city’s decision to create the position was cited among reasons ArtPlace America recently awarded the Lawrence Arts Center a $500,000 creative placemaking grant, which calls for making over Ninth Street east of downtown.