John Sebelius's exhibit "Do you know who my father is!?" is now at the Lawrence Arts Center. It features a series of paintings, video and sculpture exploring debauchery of youth related to college Greek life. At right is the painting "Watermelon Girls" and at left in background is a mixed media installation of beer box art and watercolor paper works. 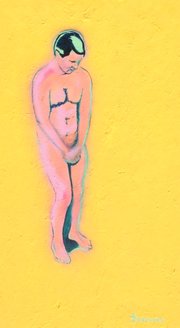 "Initiation" by John Sebelius is a self-portrait that inserts Sebelius into greek life without having experienced it first-hand in college. 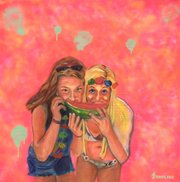 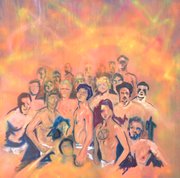 "The Squad" by John Sebelius.

John Sebelius is not lost on the irony in the title for his latest exhibit at the Lawrence Arts Center.

The title is something he overhead a young man say who had been overserved at The Wheel while the bartenders were trying to get him out of the bar.

“His first response with this great sense of entitlement was, ‘Do you know who my father is?’” Sebelius says. “It kind of poked fun of both myself and this idea of entitlement and invincibility. I think it’s pretty fitting for me as the artist, but also this exhibit.”

It’s pretty common knowledge who Sebelius’ parents are: He is the son of Kathleen Sebelius, former Kansas Governor and former U.S. Secretary of Health and Human Services, and K. Gary Sebelius, a federal magistrate judge for the District of Kansas.

The “Do You Know Who My Father Is?!” mixed media exhibit, however, explores a side of invincibility as it relates to greek life, something Sebelius did not have access to, having gone to Rhode Island School of Design for his bachelor’s degree in fine arts.

Spending the past year digging through public Facebook profiles of Kansas University students, Sebelius familiarized himself with the fraternity and sorority lifestyle by looking at thousands of their photos. He began to notice what he calls a “peacocking mentality.”

“Everyone has this need to put everything online,” he says. “I think when you’re younger and within this community there’s this disregard for censorship and a want for interaction.”

In the corner is an installation piece of empty tubs that held protein powder, pizza boxes, beer cans, 5-Hour Energy drinks, a mirror and other items Sebelius saw recurring in the students’ photos.

“The day after the party everything gets pushed off into the corner,” Sebelius says. “Fitness and beauty all plays a heavy role in this imagery. The protein was essential in that.”

Against the wall, a video slideshow runs through photos with the text “this is why I rush” flashing in between shots, and audio taken from “local watering holes” plays in the background.

But check all judgment at the door. Sebelius’ exhibit isn’t taking any stances on greek life.

He may not have been involved in greek life, but many of his friends were, he says. He understands the first jolt of freedom as a young person represented by the color overload visitors will experience upon entering the gallery.

“There’s something about that world that’s vibrant and bright that intrigues me,” he says. “When a grouping of that community is down the street, they grab your attention for some reason.”

He inserts himself into this world further with a self-portrait called “Initiation.” Pictured nude and hunched over, his hands clasped together in front of himself against a bright yellow background, Sebelius sparks the narrative of a humiliated pledge.

“I had to put myself in it so I’m not an outsider, and I put myself in the most vulnerable positions here,” Sebelius says. “It was my initiation into this group.”

Since graduating with a master’s degree in illustration at Kansas University in 2012, he’s filmed two documentaries.

“Welcome to Slab City, USA,” which screened this year at the Free State Festival, is about a community that makes art off the grid in the Slab City desert of California.

His short documentary “Find Me a Man” explores the life of a close family friend who lost her husband to a drunken driving accident and is now seeking love in the second part of her life.

He credits Lawrence’s low cost of living to being able to maintain a lifestyle where he can experiment with many art mediums while engaging with his favorite subject: people. Most of his works involve following lives closely, whereas this exhibition was approached through social media alone.

“This has been interesting because I don’t know any of these people, so it’s creating my own world of what’s going on,” Sebelius says. “We’re at a weird point where technology meets life now.”

There will be a Final Friday opening reception for the exhibit at 5 p.m. Aug. 29, and it will have a few surprises to engage all of the senses and recreate this world in the gallery space, Sebelius says. He hopes to attract the very students in the images by putting posters at The Wheel, The Hawk and Bullwinkles Bar.

“Most of these students are young, like freshmen and sophomores,” he says. “It would be interesting to see what their response would be.”