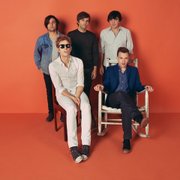 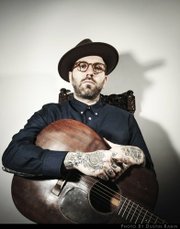 City and Colour (aka Dallas Green) 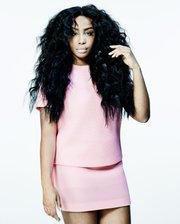 The Lawrence music scene is relatively quiet in the summer. We lose some of our most-devoted concertgoers when Kansas University students go home. But the silence is finally over.

Mark your calendars now for nationally touring bands, jazz ensembles, emerging artists, musicals and other acts making their way through town this fall. Here’s a preview to get you started:

American Fusion Project 2014: Into the Sun

Kansas native and Juilliard piano major Kristen Doering is bringing her arts fusion project to the Lawrence Arts Center on its week-long tour through Kansas. The American Fusion Project is a collective of New York-based dancers, a composer, a violinist, a cellist, a vocalist and a pianist who will combine their art forms in pieces inspired by the Frank O'Hara poem, “A True Account of Talking to the Sun on Fire Island.” Sign up for an interactive workshop ($10) taught by members of the project to explore techniques in the choreography of responding to art from other disciplines. The workshop will be from 5:30 to 7 p.m. Sept. 3.

Created in 1798 by an act of Congress, “The President’s Own” United States Marine Band is the nation’s oldest continuously active professional musical organization. The ensemble, under the direction of Marine Band Director Lt. Col. Jason Fettig, puts on a show featuring the traditional patriotic marches that made it famous as well as new works. All tickets have been distributed, but ticket holders who are not present at 7:15 p.m. will lose their seats and their seats will be given to those in the standby line.

Tony Award-winner Christian Hoff, Michael Longoria, Daniel Reichard and Tony Award-nominee J. Robert Spencer are The Midtown Men. Four original cast members of “Jersey Boys,” they have joined forces again to put their own twists on ‘60s hits from The Beatles, The Beach Boys, Motown, The Four Seasons and more, both vocally and choreographically. Not only have they garnered quite a bit of attention as a live act, but their self-titled debut album, featuring iconic ‘60s songs “Can’t Buy Me Love,” “Up On The Roof,” “Time Of The Season,” and “Candy Girl,” was met with critical acclaim.

City and Colour is the solo acoustic pop-rock project of former Alexisonfire guitarist Dallas Green. The Liberty Hall show in November was a last-minute addition on the Canadian’s fall tour to support his fourth studio album, “The Hurry and the Harm." Green’s record reflects honest lyricism, soft melodic sounds and an emotional journey through Green’s mind during the final days of Alexisonfire. Most notable about a his development as a solo artist is his shift from basic acoustic guitar, piano and vocals on his previous albums to full instrumentation on his latest. He’s also ditched the moody folk singer descriptor and has transformed into a catchy but thoughtful singer-songwriter.

The Rennie Harris Puremovement aims to deconstruct negative general perceptions of hip hop presented by the media and introduce audiences to sophisticated hip hop dance theater. Rennie Harris founded the troupe with the belief that hip hop can explore themes beyond racial, religious and economic boundaries and present the voice of the new generation. For a two-hour program, Harris choreographed a centerpiece entitled “Rome and Jewels” that places Romeo and Juliet in a hip hop world with mesmerizing back flips, aerials and tight dance moves.