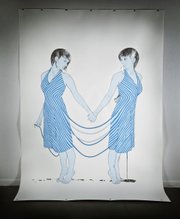 "Silent" by Gunyoung Kim as part of her "The Mirage and The Rainbow" thesis exhibit. 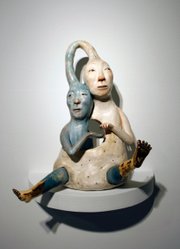 "Romance" by Gunyoung Kim as part of her "The Mirage and The Rainbow" thesis exhibit. 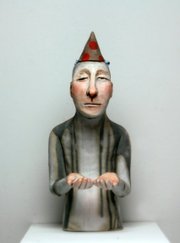 It’s one thing to be a printmaker or a ceramist, Lawrence Arts Center CEO Susan Tate said. It’s another to thrive as an artist by taking that talent down a path less traveled.

Tate sees these qualities in this year’s LAC resident artists, welcomed to the building earlier this month.

Printmaker Tonja Torgerson and ceramist Gunyoung Kim were selected for the highly competitive program. They will spend the next year teaching classes, taking part in community-driven programs and creating a body of work for an exhibition at the end of the year. The center offers curatorial and technical assistance in ensuring the artists fulfill their vision, Tate said.

Torgerson and Kim stood out among the 60 to 70 applicants because of the many ways they have explored techniques in their respective fields, Tate said.

“Tonja is familiar with various printing processes,” Tate said. “We also appreciate the way she is exploring themes about the body and politics of the body.”

“We’re very interested Gunyoung’s use of the figure, and in her experiments with glazes.”

Torgerson has been on the arts track since the age of 16 when she traveled five hours away from her northern Minnesota home to attend the Perpich Center for Arts Education in the Twin Cities suburb of Golden Valley, Minn., for two years.

Required to take screen printing as part of the curriculum, Torgerson was surprised to enjoy a process that resulted in multiples of one image.

“The second I found printmaking, it was my life and I’ve been doing it ever since,” she said.

Torgerson has since taken her medium further by incorporating her lifelong love for drawing to make print-based installations, three-dimensional prints and street art.

“I see print as a really useful tool, and not the only way to produce images,” Torgerson said.

In her latest project, a series blue and grey figure portraits dealing with bodily crises are transferred onto newsprint. They will be pasted in the streets of Albany, New York, in mid-September as part of the East Coast National Screenprint Biennial.

“So it’s who we are as related to a body that is going to breakdown,” Torgerson said. “I love it because it gets put up with wheat paste so it will decay just as we will decay over time.”

She came across street art a few years ago while collaborating with other artists on a ceramics project and found a way to translate that experience into with her own work exploring the decaying body and how acknowledging death makes life more valuable.

Torgerson received her master’s degree in printmaking from Syracuse University and a bachelor’s degree in studio arts from the University of Minnesota. Her latest residency was in West Virginia.

She sees this residency program as an opportunity to develop her craft and explore Lawrence’s unfamiliar territory.

“Even though the population isn’t very big, there’s a lot going on here, with a ton of restaurants and a ton of music,” Torgerson said. “It’s a very active town.”

Kim fell in love with the human figure as it relates to human emotions.

“With just a little bit of clay, you can change all facial expressions,” Kim said.

While attending Kookmin University in Seoul, South Korea, for her bachelor’s degree in ceramics, Kim explored the manipulation of figures’ facial expressions and gestures to unveil various psychological aspects of each character.

Kim uses distortion as a key manipulation tool, inspired by working with disabled children in Korea several years ago. She represented these children in her early work as distorted figures to represent the challenges they face in comparison to other children.

“Now that I’ve come to the United States it’s so weird because I feel to myself like I’m a stranger and even a disabled person,” Kim said. “I struggle with my second language and cultural differences.”

Kim went to Ohio State University in 2011 to pursue her master’s degree in ceramics. She started creating distorted sculptures about herself and her experience in a foreign country to express hardships she faced and explore the murkiness and complexity of emotion.

“For example, when I think about my family, sadness comes from missing them, but happiness comes from the memories,” Kim said. “They are such different feelings existing at the same time.”

Her work also features a clay slip finish called terra sigillata that leaves “a matte, but smooth surface like skin.” It’s a technique she will incorporate in the classroom.

As Kim has become more comfortable in the U.S., her work has reflected her relationships with people around her. She is excited to see how Lawrence factors into her final body of work.

“I’m looking forward to making work influenced by people in this place,” she said.