“From minute one, Mary’s been very much like, ‘Forget the movie. Forget everything Disney,’” says James Diemer, the show’s technical director. “We want to take this from the point of view of the book.”

Those expecting a carbon copy of the 1964 classic film starring Julie Andrews may be in for a surprise come Friday evening, when “Mary Poppins” makes its debut at Theatre Lawrence.

The stage musical, which premiered in London 10 years ago, is more faithful to P.L. Travers’ book series than the Disney film that mixed cartoons with live action.

When: Performances are Dec. 5-21. A complete schedule can be found online.

Dancing penguins won’t appear on stage this weekend, but audiences will still be every bit as charmed by Theatre Lawrence’s production, Doveton says.

That’s certainly the case with the show’s technical crew, says Doveton, who have been “stretching their imagination” to great lengths in order to pull everything off.

Doveton, Theatre Lawrence’s longtime executive director, steps in about once or twice a year to direct. Out of the “hundreds and hundreds” of productions she’s helmed over her career, “Mary Poppins” is perhaps the biggest.

In this version, scenes from the movie are left out (such as Uncle Albert floating up to the ceiling from uncontrollable laughter) while parts from the books have been restored, including a bit where statues in the park spring to life.

The musical’s lengthy list of “scenic demands” includes hundreds of costumes for a nearly 30-member cast, sets with 48 walls and 122 casters and “pages and pages and pages” of props, says Diemer, who faced the daunting challenge of recreating the story’s fantastical elements with little help from the script.

“The script is written from the point of view of magic, but doesn’t prescribe any answers. Everything is just appearing. It’s always, ‘nursery appears’ or ‘the characters appear on the rooftop’” he says. “In about 12 years of doing theater, I’ve never seen a script that’s so blatantly like, ‘Good luck.’” 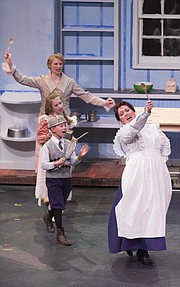 Realistically executing that magic called for all hands on deck, says Diemer, who consulted with a local magician as well as community theaters in Topeka and Salina that had also staged the production.

One of the movie’s most memorable moments — Mary’s inexplicably bottomless carpetbag from which she retrieves a coat rack, a full-length mirror, a teacup and a potted plant — proved a challenge for Theatre Lawrence’s stage, which doesn’t have any trap doors to hide anything under.

For the show’s flying scenes, Diemer brought in the big guns. The nationally known ZFX Flying Effects stage over 400 productions annually, and assisted Theatre Lawrence with the installation of the tracked flying system.

The apparatus includes both a manual fly line and an automated fly line, which is controlled by joystick.

Making it all look seamless has been a challenge for Melia Stockham, who plays Mary.

Bert, played by Jake Leet, sings while painting in the park during a dress rehearsal on Tuesday, Dec. 2, 2014 at Theatre Lawrence.

The theater veteran admits she has not “traditionally enjoyed heights,” but says the flying harness (which is held up with 1/8-inch-thick wires) has become almost like “second nature” to her, thanks to Theatre Lawrence’s flight crew.

“You have to be comfortable,” Stockham says. “You don’t want the audience to watch and wonder, ‘How do they do that?’ You want them to get swept up into the magic.”

So, would Travers have approved of Theatre Lawrence’s musical?

“I’m not sure she was pleased with anything,” Doveton says with a laugh, though the director thinks the production is “truer in spirit with the book.”

For Doveton, staging “Mary Poppins” has been an especially gratifying experience.

The daughter of a librarian, Doveton first fell in love with Travers’ books as a young girl. Decades later, she remains a fan.

“It’s been a real gift to be able to bring this to the stage, because it is such a warm, magical story. I think it’s a show and a story that can be shared by so many different generations,” she says. “It’s a story about family coming together.”