Ashley Davis may call Kansas home, but these days, you’ll be hard-pressed to find her there.

What: Ashley Davis: Celtic Songs for a Winter's Eve

Cost: General-admission tickets cost $20, and can be purchased online or in person (without the $5-per-order fee) at the Lied Center ticket office.

The Celtic singer and Lawrence native returned to her hometown in 2009 after leaving at 18 to attend college in Nashville. From there, she moved to Ireland (earning her master’s degree in traditional Irish music from the University of Limerick) and spent the next several years globe-trotting from an artist-in-residency on the Isle of Man to a stint in Las Vegas as a soloist in Michael Flatley’s “Lord of the Dance.”

She’ll make the journey back to Lawrence to stage “Celtic Songs for a Winter’s Eve” at the Lied Center.

Davis, joined by her ensemble and Dublin-based harper Cormac De Barra, will perform all 11 tracks from her 2012 album, “Songs of the Celtic Winter,” at 7:30 p.m. Friday.

It’s her fourth annual winter solstice concert in Lawrence, a tradition that each time very much feels like returning home, Davis says.

“I’m on the road so much playing here and there, from China to Athens, Georgia,” Davis says during a phone call from New York City, where she spends about a week out of each month. “It’s nice at the end of the year to do these concerts and reconnect with everybody.”

With a heavy touring schedule and the release of a new album “Night Travels,” recorded in Dublin, New York City, Los Angeles, San Francisco, Nashville and Kansas, the last year has been a busy one for the 38-year-old.

“It’s so relaxed for me to be able to be there and chat with the audience and share these songs,” she says. “A lot of the audience have had this album for the past three years now, so they know the music, and that’s really special.”

Davis will also play a few more familiar Christmas tunes, so those who are newcomers to her music can still sing along.

“Celtic Winter” — which blends original compositions with centuries-old carols and poetry — has a decidedly secular vibe, says Davis, who was inspired by the nature's beauty at wintertime. 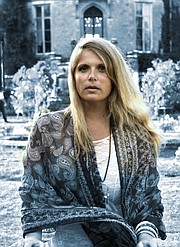 The resulting work is a career milestone, as Davis calls it — a culmination of “literature and song and beautiful moments” from her own wintertime memories.

Friday’s concert is just as “important” an occasion for Jackie Davis, who will fly back from the Big Apple to see her daughter perform. The elder Davis helped establish the Lied Center in 1993, and served as its executive director until 2000.

“It’s a special concert for me because I grew up with the Lied Center and a lot of the staff that’s still there have known me since I was a little kid,” says Ashley, who remembers attending the opening ceremony as a teenager. “So, it very much feels like returning home when I get to play there, because I have so many memories of it.”

In addition to family and friends, Davis also expects to see some of her former teachers in the crowd — from those who taught her when she “was quite little, up to high school,” she says.

More than 30 years after getting her start in the music industry, Davis can now count herself as a teacher, too. She works with a handful of young musicians at her Lawrence studio, teaching everything from guitar to singing to songwriting.

About 10 of those students, ages 9 to 17, will share the Lied Center stage with her to perform the call-and-response “Winter Jig.”

“When I moved back to the community, I wanted to give back in the way that local musicians gave to me when I was growing up and helped form me into the musician I am today. I just love getting to spend my time with them when I’m not on the road,” she says. “It’s a really nice moment, to watch them perform on the stage with me and then look out in the audience and see their parents smiling up at them. There’s some beautiful, raw talent there, and it’s quite evident in these kids.”

We are again excited to have Ashley back home. One of our highlights of the Holiday Season is her Winter Soltice concert..