Wilt Chamberlain (Justin Wesley), center, and his date (Sara Kennedy) are told they must move to the balcony by a movie theater usher (Aubry Peters) in a scene from “Jayhawkers.” 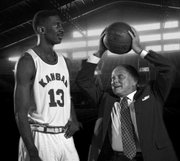 Phog Allen gives Wilt Chamberlain, left, a few pointers. Chamberlain so dominated, he changed the face of the game. 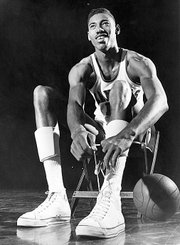 Wilt Chamberlain — Wilt “The Stilt” joined KU’s basketball team in 1955 and went on to a two-year career in which he averaged 29.9 points and 18.3 rebounds per game. He also had a long, dominating career in the NBA. 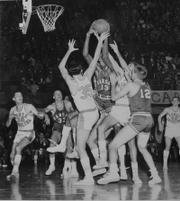 Kansas University sophomore Wilt Chamberlain (13) struggles to draw a rebound away from a crowd of players during the 1957 National Championship game.

After the 2004 success of Willmott’s faux-documentary satire “C.S.A.: The Confederate States of America” at the Sundance Film Festival, the filmmaker found himself pitching an idea to HBO and ESPN for a biopic of Wilt Chamberlain. “Wilt of Kansas,” which he started writing not long after the basketball legend’s death in 1999, was going to start with Chamberlain in his mansion in Los Angeles as an older man and flashback to, among other things, his days playing college basketball for Kansas University.

But he couldn’t round up the funds, and he let the rights to a Wilt biopic lapse. As Willmott and co-screenwriter Scott Richardson moved on to other film projects, they also began retooling their screenplay in the meantime. Rather than profiling only Chamberlain’s story, the refocused “Jayhawkers” became an ensemble film with lots of historical context, centered on the three years Chamberlain spent in Lawrence and the permanent effects that period of time had on both the city and the sport.

“This film is more about the town, Phog Allen, Chancellor (Franklin) Murphy, and Wilt coming — and how it changes everything,” Richardson says.

Next weekend, the independent film 15 years in the making can be seen for the first time on the big screen. Starting at 7 p.m. Friday, “Jayhawkers”— which was shot mostly in Lawrence — will show eight times through the weekend at the Lied Center. The movie will tour the film festival circuit directly following, so this will be the only time in a while that audiences here will have an opportunity to see what is bound to be the quintessential movie about Lawrence.

The basketball player who changed Lawrence

“A lot people think because of the Free State thing, that Lawrence was always progressive, but it wasn’t like that at all,” says Willmott, who directed “Jayhawkers” and is an associate professor of film at KU. “The film will be interesting for young people to see in terms of a Lawrence that they didn’t even probably know ever existed.”

Of course, that “Free State thing” he refers to are the original Jayhawkers themselves: anti-slavery militants who fought against pro-slavery forces during the Bleeding Kansas border wars that predated the Civil War. One theme running all of writer/director Willmott’s films is taking a hard look at modern racial attitudes, and that idea is also central to “Jayhawkers.”

In the movie, he draws a parallel from Kansas’ bloody past and the imminent cultural changes that were forced on Lawrence in 1955 when Coach Forrest C. “Phog” Allen and Chancellor Franklin Murphy brought the already famous Chamberlain — who was from a non-segregated school in Philadelphia — to KU.

“There had never been an athlete like Wilt yet. He’s really the first superstar recruited from high school,” Willmott says. “The fact that Phog Allen got him was a big, big deal. This was the first time a college had to work that hard to recruit an athlete.”

The civil rights movement is just starting when Wilt arrives in Lawrence, which is still heavily segregated, so the city doesn’t have any examples to go by. Chamberlain is used to being treated differently. He’s a celebrity before he lands in Lawrence, and Allen and Murphy want to make sure he stays here. The coach wants Wilt because he wants to win games, while Murphy — a true progressive — has an agenda of his own. In the film, Murphy is played by KU theater graduate Jay Karnes, known for his roles on TV’s “The Shield” and “Sons of Anarchy.”

“Murphy is the guy who makes Lawrence Lawrence. He used the power of KU to change the culture of Lawrence. He wants Wilt here because he’ll have this effect on everything,” Willmott says. “That’s how sports effects change. These athletes who have all this talent happen to be black, and so you bring them into a segregated world — and the world has to adjust.”

Chamberlain wanted to play at KU because Allen was the best coach around. Known as the “father of basketball coaches,” Allen was a protégé of James Naismith, who invented the game. As played by KU graduate and longtime film, TV and theater actor Kip Niven in the movie, Allen also becomes the wounded heart and soul of the film.

“The fact that Phog was a ‘legend’ had no bearing on how I approached the role — except that there was biographical and photographic information available. I read ‘Phog Allen, The Father of Basketball Coaching,’ by Blair Kerkhoff — full of great photos,” Niven says. “I also was able to benefit greatly from conversations with members of Dr. Allen’s family, who were kind enough to give me the notion that I was on the right track.”

Niven, whose first role was a bit part as an Olathe gas-station attendant in 1967’s “In Cold Blood,” has been limited to supporting roles in most of his film work, so he appreciated the chance to sink his teeth into a larger role with a full character arc. In addition to showing the key sports-related moments you would expect, “Jayhawkers” also shows glimpses of Allen’s life outside the court. Niven lives fully in the role, giving it a depth and complexity that helps ground the movie and make it more than just a history lesson.

Another layer to “Jayhawkers” is provided by the film’s narrator. Trai Byers plays Nathan Davis, a saxophonist enrolled in KU’s music program in 1955 — a time when the university would take your instrument away if you were caught playing jazz. Davis and Wilt became friends and used to hang out in Kansas City’s famed 18th and Vine District, so it’s fitting that Davis’s original jazz recordings make up the entire soundtrack of the movie.

“The fact that jazz wasn’t considered music then is kind of symbolic of the segregation and everything else,” says Willmott. “It’s a nice metaphor in terms of people who haven’t quite figured it out yet.”

A worry throughout the years of planning for “Jayhawkers” was the challenge of finding an actor who could play Chamberlain. Even when the movie was slated at a higher budget, there was no one in Hollywood suited to play a skinny 7-foot-1 basketball star, much less have the chops to pull off Wilt’s dynamic feats. It was Coach Bill Self who recommended current KU forward Justin Wesley, who is 6-foot-9 and has a slender frame similar to Chamberlain’s. Wesley is as understated as Allen is outwardly emotional, providing an interesting dynamic between player and coach.

Willmott was extremely pleased with the work his basketball-star-turned-actor did way back in late July and early August 2012, when the movie was shot.

“I don’t think there’s anyone in the country who would have been as good as Justin is in the film,” Willmott says.

Chamberlain played in the debut game at Allen Fieldhouse — a freshman-varsity match where he put up 42 points and led his team to beat the KU varsity squad for the first time ever. Ironically, the court named after Coach Allen couldn’t be used during the filming of “Jayhawkers” because it is it too modern. Instead, Willmott used high school gymnasiums in Lawrence for certain scenes, as well as the gym at Topeka High School, which has a natural 1950s-era look to it.

‘The actual story is amazing’

For the style of “Jayhawkers,” Willmott turned to the classic black-and-white photographs of Rich Clarkson, who grew up in Lawrence and started snapping pictures of KU basketball in 1951. His photo of a seated Chamberlain in his KU jersey tying his shoes was named one of the 10 most memorable portraits of the first 40 years of Sports Illustrated.

Clarkson’s dynamic courtside pictures of Wilt and the Jayhawks reminded Willmott of the boxing scenes of Martin Scorsese’s “Raging Bull” — stark blacks and whites, no grays and very little actual shots of the crowd. There were two directors of photography who achieved a similar look for “Jayhawkers,” and both are Lawrence residents and longtime Willmott collaborators: Matt Jacobson, who is also an associate professor of film at KU, and Jeremy Osbern, a former student of both professors. Osbern and his local company Through A Glass Productions are also co-producers on the movie as well.

Shooting the basketball scenes in this very stylized manner not only helps when you have a smaller budget, but in the case of “Jayhawkers,” it allows viewers to focus on the internal struggle of the players. In one memorable scene, a racist Texas crowd is pelting the Jayhawks with various objects and spitting at them.

“Pretty much everything in the movie is true,” Willmott says. “We didn’t have to change much because the actual story is amazing in itself. The film ends with what’s called the greatest basketball game of all time: a triple overtime game against North Carolina.”

Even those steeped in KU basketball lore will find things to be surprised about in “Jayhawkers.” The movie draws from a rich reservoir of history, and puts faces to the people who shaped our city. More importantly, it shows Lawrence as a microcosm of the U.S. during a crucial time of cultural upheaval — one that would pave the way for many of the things we take for granted today.