New and improved Mayer Hawthorne headed back to the Granada 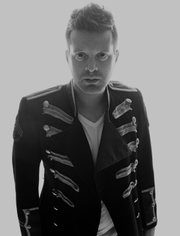 For those who have been following Mayer Hawthorne’s retro soul revival records from the very beginning, falling in love with the throwback Motown vibes, he’s changed the game up on this last one.

His third studio album, Where Does this Door Go, showcases a reinvented Hawthorne. An unexpected (reflected in the album title) range of his artistry and an album of many firsts

The idea was to throw away all of the rules and I think we did that, he says. Loosening the production reins served in his favor, interviewing 40 different possibilities before assembling an all-star team that would push him to exceed any personal limitations he’d ever put in place. This talented cast of producers include Cee Lo collaborator Jack Splash, gifted duo Pop and Oak, and Producer of Year for the 2013 Grammy’s Pharrell Williams.

“Pharrell actually reached out to me when he found out I was working on a new album,” Hawthorne says. “It totally blew me away. And I jumped on the first flight I could get to Miami.”

Their mutual love for the nerdy likes of Steely Dan gave them a basis to work from, taking that vibe in a sexy direction, Hawthorne says. “Because I think even the most die hard Steely Dan fans like myself will agree that there’s nothing very sexy about Steely Dan,” he says. “My music and Pharrell’s, we keep it sexy.”

Williams hadn’t had “Blurred Lines” or Daft Punk’s “Get Lucky” or “Happy” at the time Hawthorne decided to work with him. He hadn’t had a hit on the radio in a long time and friends were giving him flack for his choosing him, the Michigan-bred soul singer says.

“A lot of people were saying ‘why are you working with Pharrell?’ Hawthorne says. “‘He’s washed up.’ And I said, ‘this dude is a genius; you can’t count him out.”

Considering he turned a rather underground indie artist into a contemporary hit by seamlessly fusing past soul elements with present party jams, it’s safe to say Hawthorne choose right. He also secured a killer freestyle by prominent rapper Kendrick Lamar on “Crime,” a song that expressed his frustration with getting tickets while drinking wine with friends on the beach in Malibu. It was his very own version of a certain NWA police-critiquing anthem.

“We all got fined like $200 each,” Hawthorne says. “We just thought that was the most obnoxious thing ever. Kendrick being from Compton, he just seemed like the obvious choice for that one. He came in and destroyed it.”

Back in Lawrence on Feb. 18 at 8 p.m., expect an array of changes in this Mayer Hawthorne concert if you were present for his Granada show in 2011. These songs were made to be played live, he says.

“It’s by far the best it’s ever been,” Hawthorne says. “For the first time ever I really thought about how the songs would translate live as I was writing it, which made a huge difference. It’s hard to do some of the old songs because they are just not as geared for live performance.”

Rest assured, he will sing the classics. Those who are forever in love with “Just Ain’t Gonna Work Out” and “The Walk” (how can you not be?) will get their fix.