Behind the Lens: When photos require a higher perspective 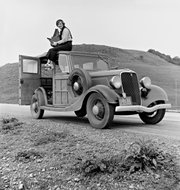 Courtesy of Library of Congress

Pictured in 1936, Dorothea Lange is photographed atop a 1933 Ford Model C with her Graflex 5x7 Series D camera. Lange was a New Deal Resettlement Administration and FSA-OWI photographer. 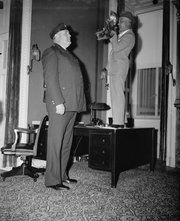 Initiative was certainly needed when news photographer Clarence Jackson, at right, was sent to get a close-up of 6 foot-9 policeman Edward F. Brown. Jackson got the picture after using a desk to gain some greater vertical perspective. Photographers often use items at hand to stand on for different perspectives.

Ansel Adams shown on top of his Ford Woody station wagon around 1941-42 in Yosemite National Park. Adams constructed a mounted platform, where he would perch his large format camera on a tripod and shoot.

After a long and happy relationship, I recently had to give up my 1996 Toyota RAV. It was a super vehicle and a surprisingly great creative device for my photography. Often, I would climb on the roof to gain a high vantage point for a subject or scene. I just had to make sure I didn’t step through the sunroof.

In one of my crazier road trip moments, I hauled along a 6-foot ladder. There was a particular Kansas monument I wanted to photograph and I knew it was over 10 feet off the ground. I placed the ladder on top of my car, carefully climbed up and got a monumental prairie vista.

This isn’t uncommon behavior for photographers. Post-war British photographer John Gay is shown in a 1950s photograph using this same ladder-on-car technique. Landscape photographer Ansel Adams and Depression-era photojournalist Dorothea Lange are both captured in images perched atop their respective vehicles sporting cameras. In Adams’ case, he’s shown in a photograph from the ’40s, standing with his large tripod atop a Ford Woodie station wagon with a permanent mounted platform.

I’m not going to tell you that ladders and tall vehicles will make you a better photographer, but I will tell you that seeking higher vantage points can provide some new perspective.

There are three main reasons I seek a higher view. It can provide an angle and composition that eliminates distracting elements in the background. At a higher angle, you are more likely to be pointing your camera downward rather than straight out at a busy horizon line.

Secondly, I’ve found that photographs of people looking up and into a camera are more pleasing than portraits taken from a lower perspective.

Lastly, I like the higher position because it provides a perspective that people don’t normally experience. It can make the photograph a little more distinctive and unique.

Very seldom does a week goes by where I don’t ask someone if I can use their chair or table to climb on for a photograph. I’ve used fire hydrants, fence posts and even mailboxes — each very carefully.

“It was empty so it was a little wobbly,” he said.

At the end of the recent Kansas University basketball loss to Kansas State in Manhattan, Journal-World photographer Nick Krug leapt up on sideline chairs to get a better view and avoid the rush of fans.

We’re all a little height-challenged on the Journal-World photo staff, so if we come to your home or place of work for a photograph, you can offer us a chair — but we won’t be sitting on it.