Writer and director John Waters will be speaking Thursday at the Lawrence Arts Center in a sold-out event that’s part of the “William S. Burroughs: Creative Observer” exhibit and series of events marking the beat writer’s 100th birthday. Waters says that growing up he “wanted to be a beatnik. Not even a man.”

Waters was famously called “Pope of Trash” by Burroughs, a name earned because of his trashy, absurd cult films in the 1970s and 1980s — for example, his star actor, plus-sized drag queen Divine, ate actual dog feces at the end of “Pink Flamingos.” Two of his films, "Hairspray" and "Cry-Baby," have been adapted for the stage and received several Tony Awards and nominations. He hasn’t made a film in 10 years, but he has kept busy hitchhiking across America for forthcoming book, “Carsick,” which will be released in June.

Ahead of the sold out event, the Journal-World had a chance to speak with Waters about Burroughs, Lawrence (calling the city an oasis in Kansas where crazies come to hide) and his thoughts on just about every bizarre topic imaginable:

Nadia Imafidon: When did you meet Burroughs?

John Waters: I met him in the ‘80s, certainly not during the beatnik days. When I was younger, those were my heroes. The first thing I wanted to be was a beatnik. Not even a man.

NI: Would you say you’re similar?

But I don’t have children so I shouldn’t be judging. Mine would be even more screwed up. I’m too self-absorbed. I’m a good uncle. I’d get you out of jail, get you an abortion, get you to rehab. And then I’d get you to tell your parents after I helped you do it.

NI: Why do you say you’re self-absorbed?

JW: Because my career is important to me and to have a child you should give up part of your life to raise that child. I don’t think I was ever willing to. I never even considered having a child.

NI: Back to Burroughs. Did he influence your work?

JW: Oh my God yeah. When I was in Catholic school I used to read some of his stuff. They weren’t familiar with his work so they’d say, “Isn’t it nice that he’s reading,” and I’d be reading something like “Naked Lunch.”

Today when I read cut-up novels, I’m not so sure. But when you’re young, you’re more open to experimentation. I just liked the fact that he had such a strong image so early. How he dressed was really a part of it because he dressed so square and he was so hip. I think that that was a contrast that I learned from... not that I ever tried to do that.

NI: How did it feel to be crowned the Pope of Trash by Burroughs?

JW: Are you kidding? It was the best quote of my life. It was like the pope himself coming down from heaven to give me the Imperial Margarine crown and James Brown’s cloak. I’m trying to picture the Pope of Trash outfit: A robe like the Cowardly Lion and trash where the fur is.

NI: What will you be speaking on at the Arts Center?

JW: My talk is about to how to survive and endure pain if you don’t want to be normal. And how if you’re neurotic, you have to learn how to celebrate it. I talk about crime, art, movies, fashion, everything. It’s how to be insane and have a good life and embrace it.

NI: One piece of advice?

JW: If you keep going for the same person that’s not good for you, you have to decide if it’s worth it for the sex or not, and if it is, you just have to realize I’m going to suffer a little emotionally but it’s worth it. That is neurotic maturity.

I’m reading the giant Burroughs biography that just came out and I think he would agree with me because he had some (relationships) too that sometimes brought him emotional unhappiness.

NI: Tell me about your hitchhiking experience for forthcoming book, “Carsick.”

JW: How far would fame go when you’re standing on an entrance ramp? Sometimes not far at all. And sometimes it almost saved me from sleeping in the woods. The worst torture was a 10-hour wait. I would have gotten in a car with Ted Bundy with a sling on his arm in a Volkswagen.

Oh and another thing, a really nice person from Lawrence, Kan., picked me up hitchhiking near there — put this in if you can — he’s in the book and he was the only person that I forgot to give my "thank you for hitchhiking" card to. So if he reads this, tell him to come to the show because I owe him the card. I even have in the book, “if you read this give me a call, I’ll send you the card.”

NI: What are your thoughts on recent Kansas legislation [HB 2453] that would allow businesses to deny service to same-sex couples?

JW: In my book I have the imagined 15 best rides I could get and 15 worst rides. And because of the laws like that one in Kansas about homosexuality, I have a chapter about something really bad happening to me in Kansas. I’m only going to give you that. I go to jail in Kansas in the book.

William Burroughs is not a good role model for young people and his life and works should not be honored or celebrated in any way. Burroughs had a lifelong addiction to opiates, first morphine and later heroin, and actively promoted drug use. He murdered his common-law wife in Mexico for which he was convicted in absentia for culpable homicide after fleeing that country. Later some observers said he became a misogynist. In 1949 he became an international gay playboy using his grandfather’s fortune. He molested underage boys in Morocco and became a sex offender.

His book, “Junkie”, a semi-autobiographical novel glamorizing drug use, has little literary value critics say. Burroughs’ “Naked Lunch” is a fragmentary collection of “routines” using a cut-up and fold-in technique. Critics question the technique and its literary value and many claim it is simply gibberish. Writer Lynn Snowden Picket accurately describes Burroughs’ books as “phantasmagorias of buggered boys, bloody syringes, talking a-holes, and vaginal teeth.” Ironically a city park and trail popular with children is named after a sex offender. We can do better than that.

I agree with Clark Coan about the value of Burroughs work.

But John Waters films are a totally different story. I have always especially liked "Hairspray" and "Pecker" and I have seen both of them many times. 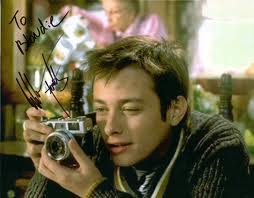 Please see my latest blog on the perfect compliment to John Waters visit to Lawrence - and make a comment!