I know what you’re thinking. It’s warm, sunny and within the 50s this week. But according to the groundhog himself, and anyone who's lived here for awhile, Kansas has got a bit of winter left up its sleeves. For when temperatures inevitably dip back below freezing and you're looking for ways to warm up, make the rounds in town for a hot glass (or five) of these concoctions.

"An eruption big enough for two" reads the menu. Probably even three, as this is one of Ramen Bowls' special fish bowls, equipped with a flaming shot of 151-proof rum in the middle of an ice bath of more rum, amaretto, grape fruit juice and orange juice. Blow out the flame and take the shot straight up, or drop it into the cold, citrusy bath and share the potent contents. It's not lacking in warmth in any kind of way; you will walk out toasty, no doubt. 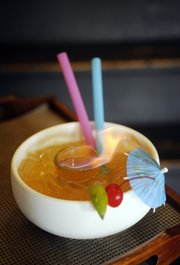 With a list of eight “corrected” coffee drinks at your disposal, you could dedicate an entire night to hot cocktails without leaving this cozy bar, paying special tribute to the Soft Picasso. Getting some chai with your liquor, it packs a bit of punch; don't let the milky frothiness fool you. Chocolate is poured around the top of the glass before the warm chai fills the cup, making for a pretty (as in beautiful) delicious drink.

Also worth trying: If you’re more into cider than anything else, try the spiked cider or ruest ,the biggest difference being the amount of alcohol (the latter an amped version of the former). 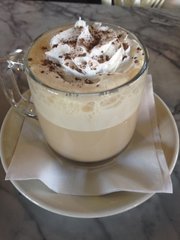 Much tamer than the other drinks on this list, this one incorporates cold-press espresso, milk, cream and two shots of Kahlua. It's really a drink for anytime of day, one Milton's bartender says. But keep in mind, just because it is mild doesn't mean there isn't alcohol that will sneak up on you eventually. Topped with whipped cream and shaved chocolate, Milton’s delivers another aesthetically pleasing, creamy specialty coffee, this time with a little kick.

Also worth trying: Other warm drinks include the traditional Irish coffee or Fireball hot chocolate (with Fireball Whiskey). 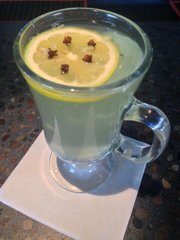 Unlike the traditional hot toddy, the honey is substituted for honey liqueur, the bartender says. You know, for a little extra something. From the name, you can also probably gather that moonshine is the main ingredient, substituting the traditional whiskey base. With a squeeze of orange and fresh ginger, topped with a floating slice of clove-infused lemon, this seems perfect for anyone fighting the beginning stages of winter colds (and, you know, still want to drink).

The bonus of having a coffee shop full of all your warm specialty beverages right down the stairs from a fully stocked bar is that you can have the best of both worlds. Not advertised on any signs in the building, order a coffee, hot chocolate, or tea of choice at Henry’s and let the bartenders upstairs make it a grown-up drink. It’s a rather laid-back environment (unless you’re there during the late-night weekend rush); I’m sure they’d be happy to help you create the winter beverage of your dreams. The most popular request is an Irish coffee: a slow drip coffee with whiskey or Irish cream or both. 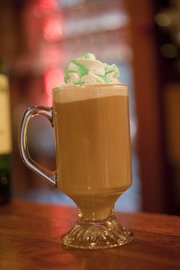 The hard stuff: Two shots, one of whiskey and one of Irish cream

Also worth trying: Anything and everything. The hot cider they have on especially cold nights has fresh apples brewing in the hot thermos.