Music therapy: Healing through the power of song 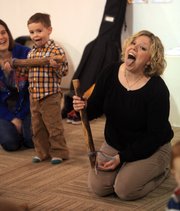 Violet Russell, holds a 'snowflake' as she dances around a class taught by Sarah Niileksela, a practicing music therapist, who teaches a class at Jump for Joy 1035 E 23rd St. in Lawrence.

A voice resonates throughout the observation booth of the Murphy Hall clinic as eighth-grader Nolan Smith holds the microphone close to his lips and gleefully sings the lyrics to Johnny Cash’s “Ring of Fire.”

Stumbling over the rhythm during the second verse, KU student Joe Shoemaker, who is playing guitar, joins him on vocals, trying to regain a slower pace, just to be shut down by a frustrated Nolan.

“I want to do it by myself,” Nolan says.

“Sing louder than me, and you won’t even notice,” Shoemaker says. “But I’d like to sing the song with you.”

Nolan has been attending music therapy sessions for three years, and not just because of his love for singing and interest in playing guitar since age 5.

Nolan has Down syndrome. With Shoemaker, Nolan is working to improve language fluency, impulse control through drumming patterns, and comfort reading music. In music therapy, he identifies notes on a staff and plays them in a melody on the glockenspiel while Shoemaker plays the piano. These are the same notes he plays on baritone in the Southwest Junior High band.

Switching over to John Denver’s “Take Me Home Country Roads,” Shoemaker continues to select songs that aid Nolan’s pronunciation of “R” and “S” sounds. They read through the lyrics first, quickly, so Nolan can get back to singing with the microphone after an enthusiastic MC opener for their duet performance.

“I’m going to bring my guitar next week,” he says excitedly to Shoemaker.

It’s not easy to gauge how music therapy alone has changed Nolan, says his father Sean Smith. He does these sessions in conjunction with speech classes in school, as well as speech-language sessions at the university. But there’s no doubt he looks forward to going every week.

“He gets disappointed when it’s Monday and he can’t go,” Sean says. “Like on MLK day, he was like, “Wait, why aren’t we going?’”

A recent study released by KU researchers in the School of Music and the Center for Public Partnerships & Research (CPPR) showed that increased music participation has important effects on positive outcomes in student achievement and engagement. Those musically involved outperformed peers in the areas of GPA, ACT scores, graduation rate, attendance, as well as discipline referrals. Essentially, the more a student participates in music, the more beneficial it becomes. The study was conducted on different groups of fifth through 12th graders who found music gave them a sense of belonging, and helped with concentration and discipline in other academic areas.

Ten years ago, maybe 25 percent of an introductory music therapy class at Kansas University had seen a news story about the field, says KU associate professor of music therapy Dena Register. Now they say they’ve known about the career since eighth grade, she says, a quick change she credits to fairly recent publicity.

In 2011, Congresswoman Gabby Giffords credited music therapy as playing a large role in relearning to talk as a part of her recovery from suffering aphasia after a bullet went through her brain.

“It’s sort of this slow unfolding of people realizing how important the arts are to us,” Register says. “We’ve sort of dismissed this as something that isn’t essential, when in fact, it’s the humanness of us. It’s interesting to see it come into the national and even global consciousness as a viable profession.”

The 67 undergraduate students in the KU program must participate in four semesters of practicum beginning junior year, as well as a six-month internship at the end of their four years. At the end of the 6-month, full-time clinical internship, they are eligible to take the board certification exam to obtain the MT-BC (Music Therapist - Board Certified) licensing credential to practice professional music therapy.

KU senior Jesse Dowell leads a group of six for one of her sessions at Cottonwood Inc., a nonprofit organization that provides services and care for individuals with developmental disabilities. With a bin of handheld instruments, supplies to do a group songwriting activity and a giant, colorful, stretchy band to work on motor skills, Dowell works on her initial goal assessment for the semester.

“I have two rules,” she tells the group. “We have to play together, and we have to have fun.”

The group pounds away on their hand drums, speeding up, slowing down and alternating who gets to choose the next rhythm pattern. Those who struggle with verbal communication receive encouragement from others around them.

Dowell later hands everyone an egg shaker or jingle bells. She pulls out her guitar and starts strumming the Hank WIlliams song “Hey Good Lookin'” and suddenly the room comes alive with several voices, percussive instruments and joyful dancing. They celebrate each song with smiles and fist bumps for individual contributions.

At the very end of the hour, they sing a goodbye song written by Dowell (one client sang along despite having never heard the song before) and share their favorite parts of the session. The general consensus: everything.

KU students in the program are taught by notable certified music therapists. Associate Professor Register is a leading advocate for state recognition of the MT-BC credential.

A large part is showing state legislators how harmful it can be by letting noncertified musicians practice therapeutic sessions without proper training.

“One of the blessings and curses of being a music therapist is that everybody has a musical experience from their life, so there is this tendency to view music as nonthreatening and as something that couldn’t possibly (be harmful).”

As a leading developer for a program in the neonatal intensive care unit at University of Iowa, Deanna Hanson-Abromeit, KU assistant professor of music therapy, used controlled vocal techniques to help neurologically-fragile, premature infants become more available to have interactions with parents or caregivers.

“If we just put on a piece of recorded music and played it for a premature infant, the complexity of the music itself and the lack of monitoring the stimulus could potentially cause harm,” she says. “It could overstimulate them, which doesn’t help their brain development at all.”

Alicia Clair, professor emeritus and former director of KU music therapy, says her experience integrating music into a care home for those with late-stage dementia helped individuals connect with others and couples reconnect with each other.

There’s a real trauma with losing this person that you were so desperately in love with, Clair says, referring to an instance where a wife felt hurt that her husband could no longer recognize her.

Clair put on big band music, and the wife opened her arms to her husband. He walked right up to her and danced with her cheek-to-cheek as long as the music played.“It’s the rhythm that moves people, and when put the rhythm into the context of the music that they knew when they were young, it brings back all of the associations with that music,” Clair says.

KU graduate Sarah Niileksela is the only board-certified music therapist practicing in Lawrence. She's been building a clientele in town, Topeka, Baldwin, Eudora and Wellsville over the past eight years.

For a lesson on winter, children slide around the room with paper plates underneath their feet, ice skating in time to winter melodies. Pieces of white tulle became the snowflakes that Niileksela and parents would plop on their kids’ heads. It was an imaginative moment full of music; even cleanup involved singing about tidying the room.

Her largest group of clients comes from her work in early childhood literacy. Niileksela sings each page of the picture book, the kids joining her on repetitive phrases. She later sends the songs and book information to the parents if they’d like to replicate aspects of the lesson at home.

Casey Wallace brings her two girls to Music and More every week, and she says her 2-year-old Jensen will sing over and over at home until she memorizes the song.

“It gives us another strategy to think about working with movement or putting words into songs,” Wallace says. “Another way to reinforce parenting.”

“What I’ve noticed is that kids are so excited about learning things when they are doing music with them that otherwise they might get distracted more easily or get bored,” Niileksela says. “It’s another way to teach, and so many people need that alternative way to learn.”

Music therapy with Sarah Niileksela from Alma Bahman on Vimeo.