Building your own KU basketball shrine

The passion of a Jayhawk fan generally extends far beyond Allen Fieldhouse and find its way into the home. Some make collages of ticket stubs, quilts of KU T-shirts and displays of signed memorabilia; some dedicate entire rooms in the house to our beloved basketball players; and some have a 400-pound Jayhawk in their foyer.

With the beginning of March Madness upon us, it's as good a time as any to build a shrine to show support for the beloved Jayhawks. Of course, anything you've collected over the years (i.e. photos with players, signed items, life-size cardboard cut outs, pencils they left behind in class) can be added to your space and give it a personal touch, but here are seven items to provide a solid foundation for fan-boying and -girling.

Let’s start simple with a basketball with a nice Jayhawk plastered on the front. Available at Kansas Sampler, 921 Massachusetts St., it’s good to have a symbol for March Madness and what’s at stake this month. One thousand points to the person who gets a basketball player to sign their ball. That way you can channel their energy during every game.

Like any good shrine, it’s best to set the contemplative mood with candles. Available at Waxman Candles, 609 Massachusetts St., adorable egg-shaped Jayhawks make for the perfect team-worshipping addition to the perimeter of your sanctuary. And if you’re into it, go ahead and get one for each of the starting players who are bound to take us all the way (if you want to buy one for Tyler Self, too, that’s OK). No one will judge you for calling each egg by name, as long as no one is around to see you do it.

Some Kansas University fans wear their Jayhawk pride on their walls. Here's a peek at a few of Lawrence's best "KU rooms" plus photos other fans — from in town to out of state — sent us to show how they display their team spirit.

Paying tribute to the team is much more than just visuals. Creating the ambiance before, after or during commercial breaks of any game, pop open the Kansas University music box, available at Kansas Sampler, 921 Massachusetts St., and sing along to the instrumental fight song. The box has some space to hold a few prized possessions, including class rings if you’re a KU alumnus or the lock of hair you managed to snatch up after Andrew Wiggins took a trip to the barbershop (don’t tell anyone about that one).

What better way to get through the month of March than to look up at the titles our Jayhawks have racked up over the past 92 years. The dates — 1922, 1923 (these first two Helms National Championships), 1952, 1988, 2008 — as well as the words “titles,” “tradition,” “glory” and “power” standing out among a series of photos of basketball players and coaches collaged onto a 3-D poster available at Jock’s Nitch, 837 Massachusetts St. These are the people who have made the KU legacy powerful and the subjects you are paying tribute to as you cheer on the latest and greatest editions of team.

Have you ever found yourself reading game recaps and poring through KU basketball galleries on KUSports.com and come across an awesome photo you simply must have of a monster Joel Embiid block or Andrew Wiggins dunk? If you click on any photo you see, there is an option to buy a print of it in various sizes, finishes and frames. If your heart desires a 20 x30 photo of Wiggins cheesing after a last-second win against Texas Tech, Journal-World photographer Nick Krug took the perfect shot of that euphoric moment for your bedroom wall (also wallet-sized to carry him with you everywhere you go). You don't even need to leave the house to shop for the next shrine collage addition.

Kansas guard Mario Chalmers hoists a three-pointer over Memphis guard Derek Rose with seconds remaining in the second half of the national championship Monday, April 7, 2008, at the Alamodome in San Antonio.

We all remember it. We have all seen the three-point shot with 3.6 seconds left in the 2008 national championship that tied the game and propelled the Jayhawks to victory in overtime. It brought us so much joy we destroyed Mass. Street. In fact, if you didn’t watch it that night, you have surely seen it since because your friend wouldn’t stop talking about it the weeks following (still hasn’t?). A photo of the miracle shot is available at Framewoods Gallery, 819 Massachusetts St., and framed to be mounted on your wall as a centerpiece to any shrine. That way, anyone who stumbles upon this giant Jayhawk memorial will inevitably see the photo and give you an excuse to relive the greatness that is KU basketball.

At first, you’re going to think it’s too much. It’s not. You want to have a bird’s head on your noggin and complete the ultimate KU fan look (there are also Jayhawk slippers, so you’re going to want those, too). You’ve already gotten the jerseys for Selden, Embiid, Wiggins, Ellis, Traylor... scratch that, you’ve got them all. But not this hat, which can be found at Kansas Sampler. It should always been worn in this crimson and blue zone where you should assume all of the good vibes are being sent out from atop your head. 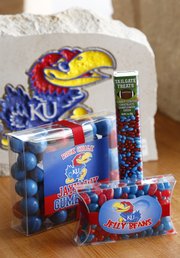 This is really just for your snacking benefit, but why have Doritos in this den when you can have bowls of crimson and blue sunflower seeds ($3.65), gumballs ($7.95) and jellybeans ($9.95), found at Kansas Sampler. People might question your dedication otherwise.