Lawrence Inside Out: the people's art project

Who contributes to the arts scene in Lawrence? What do those faces look like?

Local artist Rachael Perry is setting out to answer those questions with her local take on the global Inside Out Project.

Perry is not only seeking out musicians, dancers, writers, artists, designers and any other kind of artist imaginable, but she is looking for the art-enthused and supporters. That is, those who never miss exhibition openings; those who are married to artists and are therefore continuously engaged in the art world; those who are young and feel as if they were born to create or want to be art teachers when they grow up.

Lawrence Inside Out photo project 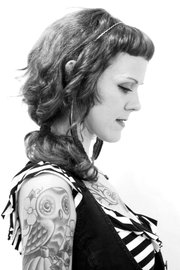 Photographer Rachael Perry is shooting black and white portraits of Lawrence artists, those engaged in the art world and young artists at heart for a local take on the global Inside Out Project. Next year Perry will be hanging the photos in as many places throughout Lawrence as she can.

Perry is capturing simple black and white portraits of hundreds of local faces and collecting a quote that says what role they play in the art community. In April of next year, she plans on pasting (and hanging) the photos in as many public indoor and outdoor spaces and businesses as she can.

The Inside Out global art project was founded by French photographer JR who unofficially began by snapping shots of suburban “thugs and posting huge formats of them illegally in the bourgeois districts of Paris. A year later he did his biggest illegal exhibition yet, posting huge portraits of Israelis and Palestinians face to face in eight Palestinian and Israeli cities.

It wasn’t until 2011 — a few projects later — when he won the TED prize that he called for a “global participatory art project” to change the world. Perry knew she wanted to be a part of it.

“I like how he says, ‘the street is the largest art gallery in the world,’” Perry says. “It’s a chance to bring art out of museums and galleries, and bring it to the people.”

Perry received a grant from the Lawrence Cultural Arts Commission to photograph Lawrence as a city of the arts. When she accepted the grant, Lawrence Mayor Mike Dever asked if he could be included in the project, Perry says.

“As we all know, there’s so much more that goes into it than just the artists,” she says. “We all love the arts. I have seen how Lawrence has changed because of all the artist people in our community.”

Perry has plans to turn the project into a book following the public exhibition.

Anyone can schedule their portrait at lawrenceinsideout.com or reach out through the Facebook page. Perry will set up her camera at the Percolator for the July Final Friday event, and will be scheduling a couple of days at the Lawrence Arts Center for anyone who’d like to participate.

“These faces are the beautiful works of art,” Perry says.