David Lawrence, co-owner of the Legends sports bar and grill, 1540 Wakarusa Drive, sits at a table with the Big 12 Carnivore Pizza and a Gewy Lewy four-cheese burger. The KU-themed restaurant celebrates all things Jayhawk sports and features autographed photos and memorabilia. 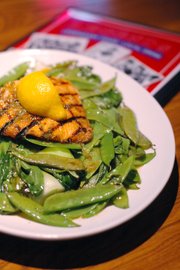 The KU sports-themed restaurant opened a few weeks ago at 1540 Wakarusa Drive, in the spot most recently occupied by Bambino’s Italian Restaurant.

But it's already had a few high-profile guests.

“I’m going to be a little bit of a wall snob, but...” Lawrence said, pointing to a wall covered in photos autographed by men’s basketball coach Bill Self, former players Cole Aldrich and Tyrell Reed and ESPN reporter Holly Rowe.

Lawrence — who owns the restaurant with 23rd Street Brewery managing partner Matt Llewellyn — is something of a local sports legend himself. He played football under the late KU football coach Don Fambrough and is now an announcer for the team. He was a longtime football coach at South Junior High School and currently teaches at Free State High School.

Lawrence said he worked with KU to get prints of recent photos. For the old ones he put on his historian hat and scoured collections at KU’s Spencer Research Library.

Black and white images show some of KU’s very first teams and coaches, plus stars — many lesser-known — of basketball, football, track, baseball and more through the years. Lawrence can tell stories and recite names from nearly all of them.

That said, Legends, after all, isn’t just a museum it’s a restaurant.

“We realize that to succeed, it comes down to food and service,” Lawrence said.

And there’s ample food to go around.

The menu features a selection of deep-dish pizza — so deep, Lawrence said, that the “single” size weighs 4 pounds and the “Big 12” size weighs 8 — giant sandwiches, burgers and steaks.

Portions on this page are still big, but are lighter on carbs and heavier on lean proteins. Highlights include the grilled salmon, served over a bed of snow peas and bok choy with citrus soy sauce, the Cindy Self Caesar Salad, named in honor of Coach Self’s wife, and grilled Argentinian chicken, with chimichurri sauce and broccoli.

Hudy has a confession, however, about at least one Legends offering she couldn’t convince them belongs on her page: “I like the nachos.”