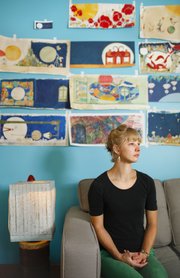 Lawrence illustrator Lindsey Yankey is pictured at her home with artwork that will be used in an upcoming children's book.

An illustration for an upcoming children's book titled, "Sun and Moon."

What happens when a bird’s best friend, the wind, goes missing? That’s a question only a children’s book can answer.

The new children's book "Bluebird" by local author and illustrator Lindsey Yankey was published in January of this year, and received acclaim and positive reviews upon its release.

“It’s one of our best-sellers,” Raak says. “It’s a beautiful book, so people who don’t know her are picking it up. And those who do know her as coming in to get it as well.”

The story behind "Bluebird" began six years ago while Yankey was pursuing an illustration degree at Kansas University and ended over 5,000 miles away in Italy.

“I thought about a bird looking for the wind or a bird being friends with the wind, and how does that develop,” Yankey says. “It’s just short one-line thoughts and then brainstorming after that.”

It was a basic concept that required a few drafted manuscripts, and many accompanying thumbnail sketches detailing composition, color flow and the overall direction of the picture book. The challenge at hand was to illustrate the absence of wind.

"Bluebird" by Lindsey Yankey is available for purchase at The Raven Book Store, 6 E. Seventh St., and at Amazon.com.

An illustration for an upcoming children's book titled, "Sun and Moon." 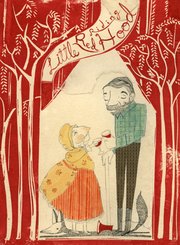 “So visually you’re showing something that you can’t see is gone,” Yankey says. “That was set up with a pretty big problem to be solved.”

To relay this idea to a child, she says, she made a list of things that are affected by the wind like balloons, newspapers, tree leaves and scarves.

“The focus of that writing was to identify things that weren’t blowing,” she says.

In 2011, Yankey scrapped her school-developed draft and made some higher-quality illustrations to put in her portfolio. She took them to the Bologna Children’s Book Fair in Italy to see if any book jobs would result from interacting with some of the 2,000 children’s book publishers who attend the annual event.

“I shopped my portfolio around as much as I could to try to see what I could stir up,” Yankey says. "Some of the booths have a person at a podium that are there to say, "no, thank you, you can leave some stuff if you want.'"

One year later she’d return to the same book fair with a polished “dummy book” of “Bluebird” especially created to give to the publishers she had spoken with during the previous year. She was all in this time.

Publisher Simply Read Books from Vancouver bit, and "Bluebird" was released in English and Italian in January of this year. She also landed a deal to create 20 illustrations for the first Italian translation of Edith Nesbit’s “Nine Unlikely Tales.”

Drawing a line to illustration

Yankey’s path to illustration wasn’t direct but a culmination of all of her interests.

“I started with education, and then art (education), and then illustration,” she says. “I changed my mind a few times, but there was a line.”

Not having taken an art class since her freshman year in high school, she rediscovered her love for art in studio classes to fulfill art education credit requirements. She has been surrounded by art since a young age because of her artist father. Yankey found herself wanting to spend more time in that end of the building than anywhere else.

“I like working with my hands, and I enjoy making art,” she says. “I feel like I do best when I have a goal in mind. I like kids. I like books. So all of these things equal that I should do this.

“I feel like there’s a lot you can say very simply, but it can be more complex than that. Picture books are a good avenue for that because they can be taken simply and kids can get it fast, no big deal, but then there are more layers and more details that evolve out of it.”

She illustrated a scene from “Little Red Riding Hood” for Lawrence Public Library’s 2012 Banned Book Week trading card project. She also constructs puzzle blocks using some of her illustrations, and she designs greeting cards. Currently, she works part-time at The Dusty Bookshelf.

Step into the author’s home today and her living room wall looks like a giant storyboard, covered with intricate and colorful illustrations for her next picture book called “Sun and Moon,” tentatively forthcoming this spring. The images are overflowing from her small studio workspace in the back of her home.

Some of the "Sun and Moon" illustrations will be part of a larger collection to be exhibited at Wheatfields Bakery and Cafe, 904 Vermont St., in the fall. They follow the moon’s adventures throughout the night as Yankey explores the premise of the moon being jealous of the sun.

“For the final illustration I like to use a lot of different things to keep it open to whatever the picture needs,” she says of the mixed media illustrations on the wall.

Yankey carved a linoleum stamp to create a multicolored geometric image; in another she laid out the image digitally; and in one more example, she painted on a thin layer of plywood, using tape to mask off certain areas.

“Rather doing something entirely in oil paint or pencil or colored pencil or all watercolor,” she says, “I can do what it needs to be.”