Off the Beaten Plate: Chinese Burrito at Thai House 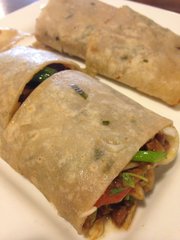 It’s rather unexpected to walk into a Thai restaurant and find a dish closely resembling an item found on a Mexican menu. The paper menu offering a variety of Thai, Korean, Szechuan and Chinese dishes, this burrito was found on the authentic menu, a smaller selection written on a whiteboard hanging on the wall.

The Chinese burrito is sliced beef brisket, green onions, tomatoes, cilantro and onions, with a sweet and garlicky soy-sauce glaze covering the mixture. Big enough for two meals, it is wrapped in a homemade flour tortilla, with finely chopped green onions in the dough. The server noted that it’s the most popular dish among the Asian customers who are generally the only ones to order off the authentic menu.

Try it with: Thai iced tea for $2.50. It’s similar to regular iced black tea, but the top half of the glass is filled with half and half.

— Off The Beaten Plate highlights some of the more exotic, oddly named or inventively concocted dishes from local menus. Know of an offbeat item we should check out? Email food and features reporter Nadia Imafidon at nimafidon@ljworld.com. Follow her at Twitter.com/nadia_imafidon.