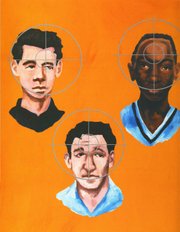 "Separate is Not Equal" by Anthony High 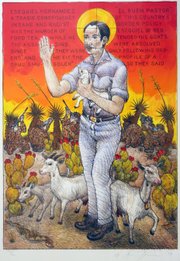 In the "Contemporary Reflections: Brown v. Board After Sixty Years" exhibition, 20 African-American artists from Kansas and Kansas City, Mo., explore the lasting significance of the Supreme Court decision, tackling different aspects of the outcome through different mediums.

Some of the artists created pieces celebrating the ruling, while some take a look at the tension and violence that resulted as black kids started to integrate into previously all-white schools. Others look at the consequences of the ruling, such as a loss of community as children were taken from their neighborhoods by bus to attend schools farther away. The current relevance of the decision is analyzed in works drawing parallels between white violence during events following desegregation and the murder of Trayvon Martin.

Renowned children’s book illustrator Shane Evans is showcased in another exhibition, “Teach Your Children Well: Shane Evans’ Images of African American Resistance.” Featuring the original illustrations for Doreen Rappaport’s book “Nobody Gonna Turn Me ‘Round: Stories and Songs of the Civil Rights Movement,” this exhibition focuses on the years between the Supreme Court decision and Civil Rights Act. Well-known activists, such as Rosa Parks, are recognized in the illustrations as well as unrecognized civil rights workers who organized the Montgomery Bus Boycott or taught in Freedom Schools.

The exhibitions will be open at the museum, 1700 SW College Ave. in Topeka, for public viewing until June 8. Admission is free.