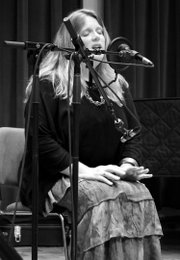 Lawrence native and singer-songwriter Ashley Davis is the featured guest for KPR's May 2011 "folk" KPR Concert Series performance, with an in-studio performance before 40 guests of the station.

For a public radio show to last 20 years is directly related to the quality of the music and talent behind the mic, which translates into listeners’ contributions.

“Radio is a fickle thing, and for a show to last this long in any format is unusual,” says Bob McWilliams, host of Kansas Public Radio’s “Trail Mix.” “Twenty years has gone by, it seems, in a blink of the eye.”

See singer-songwriter Ashley Davis perform contemporary folk songs and traditional Irish music, and world-renown fiddler Liz Carroll play traditional Irish music in the St. Patrick's Day concert at Liberty Hall. There are supposed to be many surprise guests as well on both of their sets. General admission is $25 for the balcony and $125 for 4-top tables on the floor; $400 for 10-top tables.

“Trail Mix” is celebrating its 20th anniversary at Liberty Hall at 7:30 p.m. Sunday with a St. Patrick’s Day concert featuring singer-songwriter Ashley Davis and fiddler Liz Carroll. Davis is a Lawrence native who plays both contemporary folk songs and traditional Irish music (she is more popular in Ireland than the U.S.). Carroll is an world-renowned fiddler (who’s played at the White House for St. Patrick’s Day) of Irish descent.

Bob McWilliams is in studio with folk group Red Molly, preparing for a performance and interview session to air on "Trail Mix."

“This does a really good job celebrating the Lawrence aspect, the songwriter aspect and the traditional aspect,” McWilliams says. “We covered as many bases as we could.”

The same could be said for his music selection process for “Trail Mix.”

It debuted as a two-hour show with an anxious McWilliams DJing in a tiny, poorly ventilated studio on campus (the main air studio undergoing renovations at the time) on a hot summer Sunday. After just a few minutes of the show, he got an enthusiastic phone call from Lawrence attorney David J. Brown, who loved it so much he decided to underwrite the show on the spot.

“He’s been underwriting on the show for 20 years now,” McWilliams says.

The biggest challenge was aligning artists like Dar Williams, Greg Brown and Joni Mitchell with New Grass Revival and Irish band Souls in one radio show. They didn’t want to segment the show into genres, but rather work through stylistic similarities to get from one artist to the next. McWilliams listened to (maybe two) other stations with a similar show concept and researched the transitions.

“If you know what you’re doing, you can program the transitions because there are connections,” he says. “The instrumental part of bluegrass comes right out of Celtic fiddle music. A lot of traditional American folk songs are descendents of Scottish/Irish Celtic music.”

Now an eight-hour show in a highly professional recording studio with proper equipment, a grand piano, and experienced engineers, McWilliams hosts traveling artists for in-studio sessions who are always amazed with their setup, he says.

“I know for a fact that lots of audiences have toured through Lawrence because of ‘Trail Mix.’ They’ve told me that. This was the start of something. They could get radio play here and in many places they couldn’t.”

It’s an ambitious undertaking playing bluegrass, Americana, Celtic, folk and alt-country in one show, but vast amount of positive reactions from listeners is a testimony to the great success.

“We know when listeners like something because they call up and say, ‘I want to give you $150 or $500 or occasionally $1,000,” McWilliams says. “And when you get those calls and the comments from people, ‘I never miss a show,’ and ‘I don’t know what I’d do without you,’ that’s very gratifying.”

When they started streaming "Trail Mix" online, McWilliams started to get phone calls from Virginia and California, and emails from France. He spent an entire show speaking with people across the country and overseas via Facebook and Twitter, and discovered his regular listeners were not limited to Kansas or even the Midwest.

“The first time I got a phone from someone hundreds of miles away who said, ‘There’s no show like this around here, I’m so glad I found you,’ that was pretty memorable.”

McWilliams credits a long series of happy accidents that got him into radio. After earning his B.A. and M.A. in history at Kansas University, graduating from Harvard Law School, working for a federal judge in Wichita, and then a small law firm in Johnson County, he realized he never once thought for himself about what he really wanted to do. Law wasn’t something he actually enjoyed.

As a jazz aficionado (he did graduate work in jazz history with the late Dick Wright), he had dipped his toes in radio as jazz announcer in various volunteer and part-time capacities in Boston and Kansas City. He has hosted jazz programs on KANU and KPR since 1983, later becoming jazz director and “Jazz in the Night” host in 1996.

A weekend trip to a Winfield bluegrass suggested by a Wichita law firm colleague piqued his bluegrass interest, the festival showcasing all forms of bluegrass, folk and Irish music.

“I was just a jazz man at the time, but then I went to this festival and I fell in love with this, too,” McWilliams says.

He also founded the West Side Folk concert series in Lawrence and was awarded the 2014 Spirit of Folk for his lifelong professional commitment to folk music, given by Folk Alliance International.

We are very excited to be able to attend this Sunday's presentation. What a great opportunity to share one of Lawrence's secret treasures, Ashley Davis. Congratulations to Trail Mix for making these events possible.