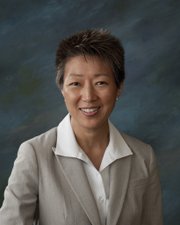 Contributed photo from Kauffman Center for the Performing Arts

Jane Chu, president and CEO of the Kauffman Center for the Performing Arts in Kansas City, Mo.

Having someone from nearby Kansas City in the nation’s top arts position could also reflect positively on Lawrence by proximity, some local arts leaders say.

President Obama recently announced he would nominate Jane Chu, president and chief executive officer of the Kauffman Center for the Performing Arts in Kansas City, Mo., to be the next National Endowment for the Arts chairwoman. Her nomination is pending confirmation by the Senate.

The position has been vacant since former Broadway producer Rocco Landesman retired in late 2012. In media reports nationwide, Chu has been described as low-profile and her nomination unexpected.

To many in this area it’s spot-on, and a confirmation of the quality of the arts here.

“I certainly think that it shines a spotlight on the artistic excellence that is available in the Midwest,” Theatre Lawrence Executive Director Mary Doveton said. “To have this wonderful resource (the Kauffman Center) in the Kansas City area and to have a woman coming out of there that is so eminently qualified, I think, speaks volumes for our entire region.”

"The NEA has traditionally recognized the excellent work done by visual and performing arts agencies in the region, and having the next NEA chair come from Kansas City is another acknowledgment of the work that happens here," Tate said.

Chu took her post with the Kauffman Center in 2006, and the venue, a 40-minute drive from Lawrence, counts more than 1 million visitors since opening in 2011.

Saralyn Reece Hardy, director of Kansas University’s Spencer Museum of Art and former director of museums and visual arts for the NEA, said the NEA has a history of deliberately distributing resources nationwide, so no special treatment would be expected. However, she said, people help distinguish a region's image.

“Lawrence and Kansas City can be very proud that a leader has had experience in our region and now is going to the national level,” Reece Hardy said. “I think all of us would only hope that that person reflects well on our culture.”

“What I’m truly excited about is the fact that she has really worked in the trenches in the nonprofit arts world,” he said, “...which is really inspiring to me.”

Obama, in a prepared statement, highlighted Chu’s involvement in the arts at the local level.

“Jane’s lifelong passion for the arts and her background in philosophy have made her a powerful advocate for artists and arts education in Kansas City,” he said. “She knows firsthand how art can open minds, transform lives and revitalize communities, and believes deeply in the importance of the arts to our national culture.”