Behind the Lens: The history of the selfie

Last year was the year of the selfie. Oxford Dictionaries even selected it as their word of the year for 2013. It’s so new that my computer tells me I’m spelling it wrong.

The definition of a selfie: “a photograph that one has taken of oneself, typically one taken with a smartphone or webcam and uploaded to a social media website.” Selfies, prior to the Internet and social media, can be traced back to the invention of photography. Many people reference Robert Cornelius as having snapped the first self-portrait sometime in October 1893. Unlike today’s instant shutter-snap, it would have taken several minutes of sitting motionless in front of the camera to get a correct exposure.

Behind the Lens - Selfies 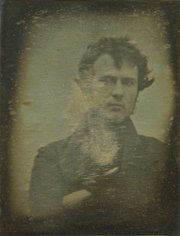 "Selfies" — the contemporary, social media hobby of taking arm-length self-portraits, are simply a more portable and accessible act of photography that has been practiced since the invention of the daguerreotype in the 19th century. This photo gallery includes both old and contemporary examples of the art of the selfie, including Journal-World reader-submitted selfies.

While that might be a stretch for teens of today, it’s believed that in 1921, 13-year-old Russian Grand Duchess Anastasia Nikolaevna, sat still long enough to became the first teen to make a selfie. She mailed it to a friend with a note, “I took this picture of myself looking at the mirror. It was very hard as my hands were trembling.”

As cameras shrunk in size and exposure lengths were reduced to fractions of a second, self-portraits became an easier artistic pursuit for many photographers. Some creative examples of photographers who have made or are making self-portraits part of their life work include Cindy Sherman, Vivian Maier and Lee Friedlander.

Today’s access to cameras in every pocket and on every phone has led to an abundance of boring selfies — most being social media uploads of arm-length party pics. But with the right subject matter, even these can cause a sensation. A recent tweet from Ellen DeGeneres, who was hosting the Academy Awards, captured a dozen Hollywood stars in one selfie, and it has been retweeted more than 3.3 million times, breaking the previous retweet record set by Barack Obama after his re-election.

It’s a fun photo, but doesn’t rise to DeGeneres’ evaluation of it as “best photo ever.”

I believe there’s a big difference between the selfie and the self-portrait. While the best selfie might cause a momentary social media frenzy, the best self-portraits requires some visual thoughtfulness and creative playfulness. If you want to add some impact to your selfies, experiment with shadows and reflections and layering your image to construct a visual puzzle.