First Christian Church, 1000 Kentucky St., will entertain visitors in a manner common nearly a century ago: a talented organist playing along to a silent film. In this case it’s Dr. Tandy Reussner, accompanying Charlie Chaplin’s “The Count.” Doors open at 6 p.m., and music begins at 6:30 p.m.

For a complete rundown of this month's Final Friday events, click here. 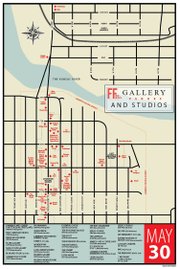 Yesterday’s fashions are on display at the Phoenix Gallery, 825 Massachusetts St., in a special program with a noteworthy cause. Seven vintage dresses — one from each decade from the 1910s to the 1970s — will be on display and paired with a featured jewelry maker who has created pieces to go with the dress and style from the era. The show, “Wear it for Women,” unites the gallery with the Ballard Center in a fundraiser to help women and mothers in crisis. Proceeds from Friday night’s sales will go into a special fund to benefit women with a specific, short-term need such as a car repair.

Another opportunity to look back on the past will be at the Carnegie Building at Ninth and Vermont streets. Visitors will be able to see preservation efforts and renovations made to the historic building as well as its permanent exhibits. May is National Preservation Month, and the Freedom’s Frontier staff wants to raise awareness about the importance of historic preservation, because when cultural and historic features are lost, our ability to connect with our heritage is diminished. 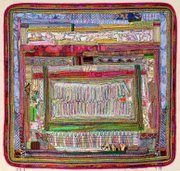 “The Field Season to Season” by Collette Bangert 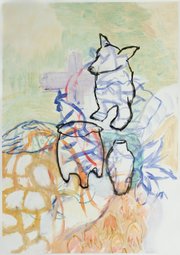 "My Boy Neggy" by Sue Ashline

Those who are more interested in what art says about today’s culture may want to visit the Bourgeois Pig, 6 E. Ninth St., or The Percolator (the alley behind the Lawrence Arts Center). Poet and graffiti artist Matthew J. Asbury will present his take on how inner emotions are expressed through social media. His show, “Selfie Destroy,” is a comment on the ubiquitous nature of self portraits in today’s digital culture.

The Percolator has taken up another aspect of contemporary society: the Bitcoin. “Honeypot,” a solo show by Walt Ohnesorge, is all about currency, flow and exchange. A montage of “money” images from the Internet will play in the gallery, and viewers can see a (plastic) 24K gold bullion laden with Robert Mapplethorpe imagery. Viewer discretion is advised.

Other venues are hosting shows that focus on the passage of time. “What Happened When P.L. Shepard Left the Painted Word?” at Aimee’s Coffeehouse, 1025 Massachusetts St., is a solo retrospective of artist Perry Shepard’s work since he left a gallery/coffeehouse he started in Utah. The exhibit illustrates his journey as an artist/businessman into the visual arts, and his penchant to explore the world from a psychological and sociological perspective.

Ashline’s works started as a series of still lifes that have gradually, over time, become more abstract.

“I want them to be, in a way, difficult and to demand more attention than just a passing glance,” she writes in her artist statement.

Bangert’s large, abstract works also reflect the passage of time. “The whole body of my work is formed of recent work from one time to another. The work always seems to process from day to day, season to season, year to year, decade to decade.”