Kansas City Connection: How to spend the holidays in KC

The holiday season is upon us, and as is always the case, there’s lots to do in Kansas City between now and New Year’s. Here’s a rundown of some of the highlights.

Don’t miss the Kansas City Southern Holiday Express Train with Santa, which will be at Union Station from 10 a.m. to 7 p.m. Dec. 18 to 21. The Holiday Express is an actual train that makes stops in several cities, with cars including Rudy the smiling tank car, a flatcar with Santa’s sleigh, a gingerbread boxcar, a mobile elves’ workshop, a reindeer stable and a red caboose.

Sponsored by the Kansas City Southern railroad company, the Holiday Express is free to enter, with donations accepted toward helping provide clothing for children in need. Visit unionstation.org for a full list of events. 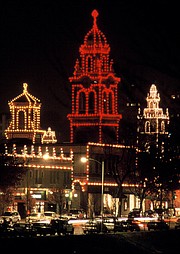 The Sea Life aquarium and Legoland Discovery Center have added to shopping center’s appeal, though each has a separate admission fee.

The festivities will run an hour before and after, and include fireworks, giveaways and live music by The Mowgli’s, The Snow Globes and Gracie Schram.

Royals general manager Dayton Moore and left fielder Alex Gordon will flip the switch at 6:54 p.m. The lights will stay on through Jan. 12.

Charles Dickens’ classic tale of greed, redemption and Christmas ghosts is brought to life each year by the Kansas City Repertory Theatre.

This year’s traditional performance of the Nutcracker Ballet will be its final run before something new is announced to take its place.

The ballet opens at the Kauffman Center for the Performing Arts on Dec. 6, with 18 matinee and evening performances scheduled through Dec. 24. For ticket information, visit kcballet.org.

“The malls are the soon-to-be ghost towns,” sang Isaac Brock of Modest Mouse in 1997. And for the most part, he was right.

But some malls seem to be doing just fine, including Oak Park Mall at 11149 W. 95th St. in Overland Park. Take the kids for a spin on the two-story Venetian carousel while you alternate browsing the 200 or so shops, which include larger retail outlets like Dillard’s, Macy’s, Nordstrom and JCPenney, as well as a food court.

In Kansas City, Kan., the Legends Outlets shopping center will be in full festive mode, with a tree-lighting ceremony scheduled from 6 p.m. to 8 p.m. Nov. 22, synchronized music and light displays from Nov. 23 to Jan. 2, a free holiday movie series for kids on Saturday mornings, and all kinds of giveaways. The area’s first Eddie Bauer outlet store also just opened this month at the Legends.

Get some wintertime exercise with family and friends by going ice skating at one of the city’s public ice rinks.

Both rinks cost $6 for admission with $3 skate rental, and hot cocoa and other beverages are available.